The 2013 PGA Tour finally got under way for just over an hour at the season-opening Hyundai Tournament of Champions in Hawaii on Sunday before play was suspended due to strong gusting winds.

With balls being blown off greens and also off players' tees, officials had no option but to halt the already long-delayed first round as the prospect of a Tuesday finish loomed larger at the Kapalua Resort.

"You just can't play in this," Slugger White, the PGA Tour's vice president of rules and competition, told reporters. "You can hardly walk in it, much less play golf.

"We were on the edge starting out at 11:10 and I think probably for 30-40 minutes we were still on the edge. And then all of a sudden we get these last gusts of up to 48 miles per hour and we just couldn't keep balls on the green."

Rickie Fowler struck the first shot in the re-scheduled opening round when he teed off at the par-four first, though the entire 30-man field was prepared for the action to be halted as high winds continued to batter the Hawaiian island of Maui.

Fellow American Matt Kuchar, who hit the first shot on the 10th hole, had a lengthy conversation with rules officials after his ball was blown off his tee before he eventually set off. 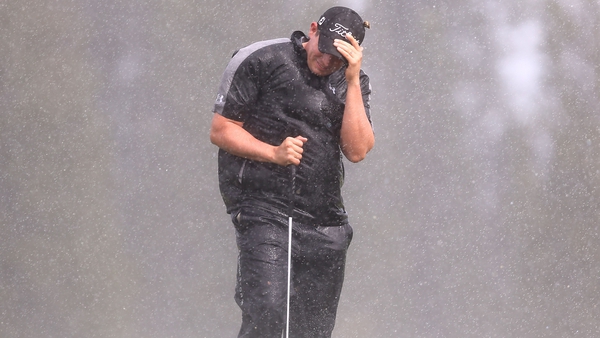