Scott Piercy cashed in on William McGirt's final-hole bogey to win the RBC Canadian Open in Ontario by one shot.

Piercy finished the tournament on 17 under after a final-round 67, but had seemed destined to go into a play-off with McGirt, who was tied for the lead approaching the 18th with overnight leader Robert Garrigus, who was one stroke off the pace.

McGirt fell just short when it mattered, though, and had to be content with joint second place with fellow American Garrigus, who on Saturday broke a 54-hole Canadian Open scoring record that was first set more than half a century ago by Arnold Palmer.

Las Vegas-born Piercy was two shots behind Garrigus at the start of the day but started with great intent, securing a rash of early birdies at the second, third, fourth and fifth holes.

Despite having bogeyed the eighth and the par-four 14th, the 32-year-old safely navigated the final four holes to clinch his second career triumph.

Crucially, he found a greenside bunker at the last and failed to get up and down.

Garrigus, who had begun the day on 16 under, parred every hole with the exception of a birdie at the 14th and a bogey two holes later. He felt victory would have been his if he had found his groove with the putter.

"I should have won this golf tournament by seven shots.Everybody knows that," he said on www.pgatour.com.

A bogey-free round of five under for the day helped Josh Teater share fourth spot with Bud Cauley and Chris Kirk.

Vijay Singh fleetingly looked a danger, too, with an eagle at the par-four fifth supplemented by four birdies.

Three bogeys proved costly, however, as the Fijian finished 12 under for the tournament after a final-round score of 67 which gave him a share of seventh place with Bo Van Pelt and Scott Stallings.

England's Gary Christian will be satisfied by his day's work after closing with a creditable 10-under par 66 to tie for 10th spot. 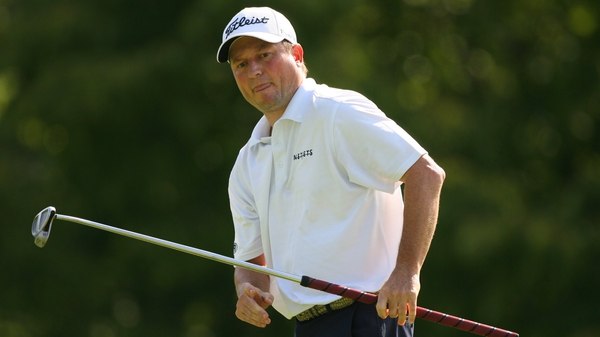