Darren Fichardt maintained his consistent performance to open up a commanding five-shot lead after the third round of the Saint-Omer Open.

On a day when many of the contenders struggled with the strong winds, the South African sank five successive birdies between the fifth and ninth holes to go out in an impressive 31.

Simon Thornton is best of the Irish on two over after a 75 and Colm Moriarty is on plus ten.

Fichardt's back nine was a little more disappointing as he dropped shots at the 12th, 13th and 17th, but his third-round score of two-under 69 was enough to move him on to seven under for the tournament.

The 37-year-old, who carded 68 and 69 in the opening two rounds, admitted the conditions had made life difficult for everyone.

"I knew it would be a hectic day when we started," he said on www.europeantour.com.

"But it turned out to be absolutely brutal.

"The string of birdies on the front nine helped separate me from the rest of the field and it was just a question of hanging on on the back nine.

"The back nine was something else. I was having to smash drives just to reach the fairway. I definitely needed all my experience and patience today."

England's Simon Wakefield is the nearest challenger to Fichardt on two under. He carded two birdies against three bogeys to complete the course in 72.

Another Englishman, Gary Lockerbie, is among a group of three players tied for third on level par.

Lockerbie had six birdies but will be unhappy with double bogeys on the fourth and 17th which saw him post a score of 69.

A bogey-less round of 67 saw Mark Tullo join Lockerbie on par along with Dutchman Wil Besseling, who carded two-over 73.

Overnight leader Sihwan Kim had a third round to forget, however.

Having started the day with a one-shot lead, the South Korean mixed four bogeys, three double bogeys and a single birdie in his round of 81 to drop to four over for the tournament. 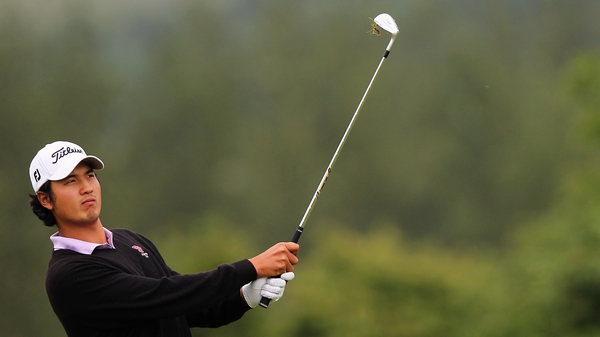