Masters champion Bubba Watson struggled with fatigue as Ken Duke birdied two of his last three holes to grab a share of the early lead in round one of the New Orleans Classic in Avondale, Louisiana.

While Watson launched his title defence with a battling one-under-par 71 at the TPC Louisiana, fellow American Duke capitalised on a strategy of patience to card a flawless 65 in blustery conditions.

Bidding for his first victory on the PGA Tour where he has been a runner-up three times, the 43-year-old Duke rattled up seven birdies to finish level with compatriot Cameron Tringale.

"You have to be patient out here," journeyman Duke told reporters.

"You can't hit it (to) four, five feet on every hole because there's so many mounds on the greens.

Northern Ireland's Graeme McDowell finished on three under after a 69.

American world number seven Steve Stricker and Swede Daniel Chopra opened with 66s while Ben Curtis, who won the Texas Open on Sunday, was a further stroke back with fellow American John Rollins.

It was a tough day, though, for defending champion Watson who was competing in his first event since winning the opening major of the year at Augusta National 18 days ago.

"I knew I needed to be here being defending champ ... but mentally I'm not here," said the long-hitting left-hander who played in a high-profile grouping with Stricker and fellow American Webb Simpson.

"It's overwhelming what happens when you win a big event like that (the Masters). The mental grind of making sure you treat everybody the same, making sure you sign everybody's autograph ... it's just time-consuming.

"I'm so out of it right now, golf is a hard thing to do right now. I just haven't had time to rest yet and take a deep breath. I'm just exhausted. Hitting the ball full bore tires me out."

Watson, who beat South African Louis Oosthuizen at the second extra hole to win his first major title at the Masters, said his main aim this week was simply to make the cut.

"That's what I kept grinding about and somehow I had a few birdies." 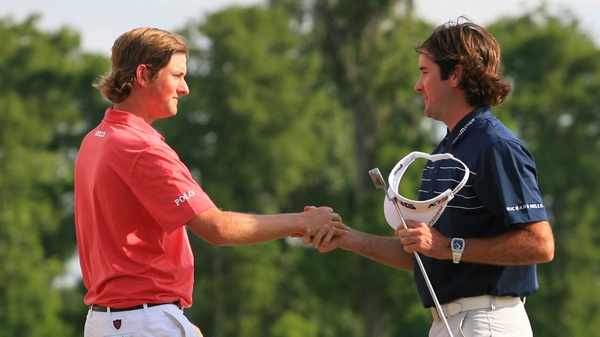