All-Ireland champions Tyrone have been handed a difficult qualifier draw as they will make the short trip to Armagh to take on the Orchard County.

The Ulster derby is one of two all Division 1 clashes with Monaghan also travelling to Mayo for the first championship meeting between the counties. Elsewhere, Clare will host Meath while it will be big against Wee as Ireland's largest county, Cork, will welcome the smallest, Louth, in two weeks’ time.

RTÉ analyst Kevin McStay said that there will be no love lost as the Red Hands put "everything on the line" against rivals Armagh following Monday morning's draw on Morning Ireland.

Reacting to the four pairings, McStay said that the intense nature of Armagh-Tyrone matches, as witnessed by the controversial finish to February’s Allianz League clash that saw four Red Hand players dismissed alongside Armagh’s Greg McCabe, should ensure an electric atmosphere at the Athletic Grounds.

"They’ve been meeting a fair bit in recent times and there’s certainly not a lot of love lost, I would have thought, between them at this stage," McStay told RTÉ Radio 1's Morning Ireland.

"And I think also for Armagh for Kieran McGeeney and his team. They have to make a significant statement."

Mayo will be hoping to get their season back on track after their Connacht defeat to Galway, but there's no easy start for James Horan’s side at Hastings Insurance MacHale Park.

Their last three qualifier campaigns have started against then Division 3 side Down (2019), Division 4 Limerick (2018) and a Derry side (2017) that had just been relegated to the third tier.

Seamus McEnaney’s Monaghan, however, is a totally different proposition.

"There’s a caveat this time around, there’s no kind of walk-in fixture to get up to your full height," McStay said.

"This is full on now with only the two rounds and the other counties gone to the Tailteann.

We need your consent to load this comcast-player contentWe use comcast-player to manage extra content that can set cookies on your device and collect data about your activity. Please review their details and accept them to load the content.Manage Preferences
"The injury list will have to be looked at carefully obviously, they were very disappointing in the championship proper against Galway and this is going to tell us all we need to know about Mayo and Monaghan and where they are in terms of their ambitions for 2022.

"Mayo have a great recent tradition getting through it but Monaghan will test them, they were hugely disappointing as well [against Derry].

"I’ll be looking forward to that one in Castlebar and that’s advantage Mayo really, you’d have to say that because of the home venue."

McStay also believes that the four Division 2 teams will now have genuine ambitions of a good championship run after being kept away from the big names.

Cork and Louth will meet in the championship for the first time since a 2007 qualifier won by the Rebels on a 0-16 to 0-14 scoreline.

This will be the second championship meeting of Clare and Meath with the Royals sneaking through by the minimum in 2019.

"I was looking at the possibilities of who might be in the provincial in round two, the provincial losers, and all those games will be very winnable for whoever wins round one.

"Great prospects for whoever can win these games in a fortnight’s time. Wow, won’t this focus training tonight, tomorrow night. You have a date, you have an opposition, you have a location and you have a time and it’s off to the races."

The games will take place between 4-5 June with times also to be confirmed by the GAA. 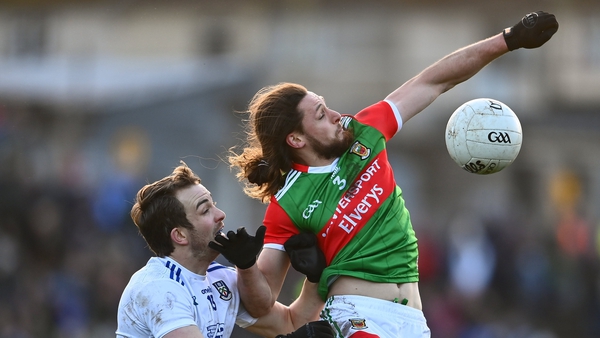