Damian Casey led the way with a 14 points haul, with Sean Og Grogan grabbing the only goal of the game in the first half.

The Red Hands led from start to finish, always keeping a comfortable margin between the sides, with Daniel Glynn the only genuine attacking threat for the Rossies, also finishing with 14 points to his name.

Tyrone made he early running, with Casey slotting a couple of points to settle the nerves of the Ulster side, and the Rossies needed a fine save from Enda Lawless to deny Aidy Kelly.

Daniel Glynn nailed a couple of Roscommon scores, but it was the Red Hands who were asking all the questions in the opening quarter.

Casey was striking sweetly from frees and play, bringing his tally to four from long range, with CJ McGourty stretching the advantage to six.

The Rossies were in a battle, challenged for every ball, and pressure on the man in possession forced them into a string of wides.

Mark Ward and Padraig Kelly had to make vital interventions at the back to keep out a fast-moving Tyrone attack, but the scores continued to mount, with Bryan McGurk slotting a couple and Ruairi Slane also on target.

And in the 23rd minute, Sean Og Grogan finished to the net from close range, connecting with a long ball, and his team were ahead by ten. 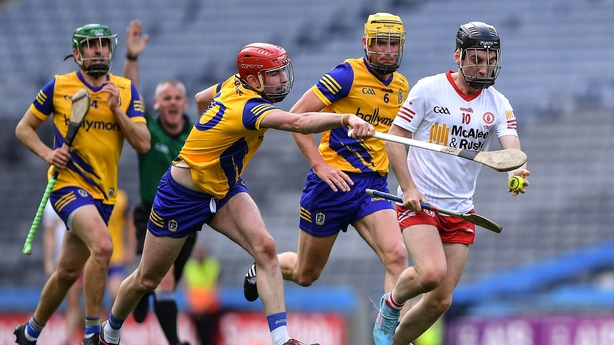 Conor Cosgrove began to get to grips with the threat posed by Casey, and Roscommon finished the half strongly, hitting four of the last five scores, three of them from Glynn, the other from Mickey Joe Egan.

It was Tyrone who led by eight at the break, 1-14 to 0-9, but a resurgent Connacht side flashed over three quick points at the beginning of the second half, Glynn with two of them, and sub Oisin Kelly also on target.

However, the Ulster men tightened things up at the back, and countered for Grogan and Casey to get them back on track with scores.

And a couple of converted '65s brought the prolific Casey into double figures as he swept over his tenth of the afternoon.

The Red Hands were pulling away, and the Rossies had no answer, depending heavily for scores on Glynn as he nailed his 13th of the contest, but his side still nine points adrift.

It was to be Tyrone's day, and a personal triumph for their sharpshooter Casey, whose sparking display of finishing.