By Brendan Lawrence at Aughrim

Wicklow recorded the first victory of the Tailteann Cup when comfortably seeing off the challenge of Waterford in a sunny but breezy Aughrim on Saturday afternoon.

A small crowd turned up to watch the first ever game in this competition and while a cagey and tense first half might not have captured the hearts and minds of those present, Wicklow's showing in the second period gives the promise of an adventure ahead for the Garden County side as they tore the Déise apart with a fine brand of attacking football.

It was a pair of peach goals early in the second half that killed this game as a contest. Blessington’s Kevin Quinn, held relatively quiet by Darragh Ó Cathasaigh up to the sixth minute of the second half, collected a ball that had hopped over Eoin Darcy’s head before bearing down and rifling home to the bottom corner of Aaron Beresford’s net.

Four minutes later, Quinn turned provider when feeding Eoin Darcy who finished with aplomb to the delight of the Wicklow faithful with team captain Dean Healy having overturned possession as Waterford headed up the field.

Wicklow held an 0-08 to 0-05 advantage at the break, having played against the breeze, but with both sides protecting their full-back lines, it made the game one of patience and probing.

Dean Healy opened the scoring for the home side before Eoin Darcy (free) and Pádraig O’Toole made it 0-03 to 0-01, Brian Lynch opening Waterford’s account in between. 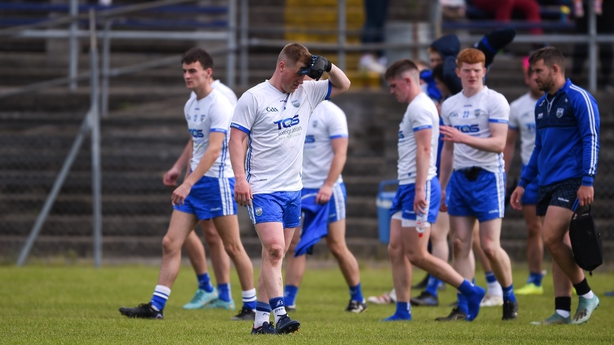 Waterford were very wasteful in this game, registering 13 wides, seven in the first half, whereas Wicklow missed just two efforts, both in the opening 35.

It was 0-08 to 0-04 after 34 minutes, two Mark Jackson frees, Eoin Darcy (free), and Mark Kenny with two helping Wicklow stay ahead but a score from Dermot Ryan left the Déise trailing by just three at the break.

Despite Waterford grabbing the opening score of the second half through Jason Curry, Wicklow suddenly found their attacking feet with gusto.

Mark Kenny fired over from a mark after a Pádraig O’Toole delivery from far out the field, Jackson added a free and then the double whammy of majors arrived leaving Waterford stunned in the Aughrim sunshine.

A point from Dean Healy and another from Eoin Darcy after his first effort walloped the Waterford crossbar left the game well and truly over as a contest.

Kevin Quinn’s late penalty made it 3-16 to 0-09 and, credit to Waterford, they never relented, adding a late 1-01 to their tally, the goal from Brian Looby.

Wicklow march on. If they can hold their players from adventures abroad, they could give this competition a serious rattle.