The rise of Derry as the compelling story of the 2022 Championship scripted another fascinating chapter at the Athletic Grounds as they stunned pre-match favourites Monaghan to reach a first Ulster final since 2011.

Rory Gallagher's plan was implemented with spectacular effect by a band of willing warriors who defended with discipline and struck on the counter-attack to send the Farney men tumbling into the Qualifiers.

First-half goals from Gareth McKinless and benny Heron, and a second from Heron after the break, completed another marvellous triumph for the Oak Leafs, who had already knocked All-Ireland champions Tyrone out of the race for the Anglo-Celt Cup.

They led from start to finish, and the manner in which they set up made this an extremely difficult proposition for the side chasing the game. 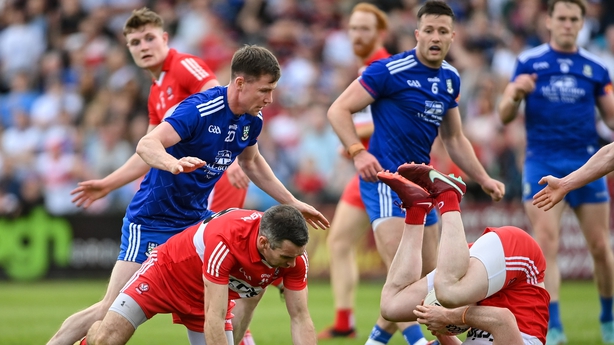 Derry's suffocation of Monaghan's attacking strategy was planned in detail and precision, and carried out to the letter by a group of players who worked relentlessly, frustrating the Farney men throughout the first half.

With 15 men behind the ball, they closed down the space, turned over possession and broke at pace to pick off the scores that saw them build up a sizeable lead, stunning the pre-match favourites with two goals.

That made it 1-2 to no-score, with Monaghan eventually getting off the mark with a Jack McCarron free in the 13th minute.

But they were knocked back again by a second Oak Leaf goal on 24 minutes. Goalkeeper Odhran Lynch played a major role, advancing well upfield to direct a pass in the direction of Niall Toner, who slipped the ball inside for Benny Heron to slot his shot past Beggan for an eight points lead.

Beggan’s kick-outs were almost flawless, setting his side on the attack time and again, but that’s where the problem repeatedly developed for the Farney men as they ran into traffic and struggled to find space against a superbly organised rearguard formation.

Conor McManus converted a free, and Conor McCarthy found a pocket of space in which to craft a well executed score, but at the other end, Shane McGuigan’s sweet left foot was inflicting serious damage, and he landed a superb point from play to bring his tally to five.

Scores from Darren Hughes and McManus late on kept Monaghan in contention, but facing a huge challenge as they trudged off at half-time looking to overturn a 2-7 to 0-6 deficit.

With the wind in their backs in the second half, they established a platform at midfield through Niall Kearns and Darren Hughes, wining possession off the Derry kick-out.

The pressure mounted, the volume from the 14,664 spectators rose as Farney fury turned the game around.

They scored five of the first six points of the second half to narrow the gap to three, with Andrew Woods, McCarron, Dessie Ward and McManus all finding the target.

Space was beginning to open up in a previously watertight Derry defence, and the momentum was with Seamus 'Banty’ McEnaney’s side pushing into the final quarter.

But their threat on the breakaway was undiminished, and the fresh legs of substitute Emmet Bradley carried him thundering through to pick off a point, with McGuigan adding another from a free.

Paul Cassidy curled over a beauty to keep Monaghan at arms length, and in the 61st minute, the killer score came in the form of Heron’s second goal.

It was Conor Glass who made the incisive run, and Ethan Doherty’s return pass sent the corner forward in to finish from close range.

Monaghan were spent, they did finish with a rash of scores from McManus frees, but this was Derry’s day, a triumph for tactical brilliance and a frenzied hunger to execute the plan.