Limerick put one foot back into the Munster final after a hard-fought seven-point victory over their old rivals from Tipperary.

There were just the two points between the sides, who contested last year's provincial final, at the break but a strong attack in the third quarter pushed Limerick over the line to victory.

Late goals from substitute Conor Boylan and Aaron Gillane in the space of four minutes sealed the win for the All-Ireland champions.

The result all but seals Limerick's place in the Munster decider on 5 June.

The win – Limerick’s fifth in the last six meetings between the two sides - continues a trend of the Treaty men’s dominance in the fixture, with just one championship loss to the Premier County since the round robin was introduced in 2018.

It is the first ever time Limerick have secured victories over Tipperary in four successive years in the championship.

Tipperary were in search of their first Munster win in Limerick since 2015, and they started the brightest.

Ger Browne got them on the scoreboard first from a point from play on two minutes, but Darragh O'Donovan had the sides level from some distance a minute later after a well-timed tackle from the Doon man in midfield.

Limerick went ahead for the first time after six minutes with Diarmaid Byrnes slotting over from just inside the 65-metre line, but John Kiely’s faced a tough Tipperary challenge from here on in.

The game's first of three goals came after eight minutes; a superb long ball in by Byrnes after a short pass from Gearoid Hegarty was met by Aaron Gillane before the Patrickswell man raised the green flag.

Aaron Gillane with the opening goal at the TUS Gaelic Grounds

Highlights on #TheSundayGame from 9.30pm

Midway through the opening 35 minutes Limerick held the narrowest of leads – 1-6 to 0-07 - after Noel McGrath kept his nerve to slot over his second free in the space of three minutes.

However, a Browne point from distance – his third of the afternoon – had Tipp back to within one point of Limerick.

McGrath slotted over Tipperary’s fourth point in a row with 23 minutes on the clock to bring the sides level for the third time before Jake Morris and McGrath put the visitors ahead, rounding off an impressive 10-minute spell which saw Colm Bonnar’s side score six points without response.

Cathal O’Neill stopped the Limerick rot in the 29th minute with Limerick’s first point from play in 24 minutes following Tom Morrissey’s pointed effort after five minutes. At that stage, Limerick had gone 13 minutes without a score except two for frees from Gillane.

O'Neill's two quick-fire points however, quickly ended Limerick's barren spell and a back-and-forth in the remaining 10 minutes of the half saw Tipperary take a slender 0-14 to 1-9 advantage into the dressing rooms.

Despite the two-point lead Tipperary had 11 wides in the opening half, two more than Limerick.

By the 50th minute, Tipperary were three points ahead, but two scores in a row from Barry Nash and Tom Morrissey narrowed the deficit to one point with 15 minutes left on the clock.

A Diarmaid Byrnes ’65 in the 63rd levelled terms for the fifth time, before David Reidy, Declan Hannon, and Aaron Gillane (free) edged the hosts three points ahead.

Goals from substitute Conor Boylan and Gillane – his second goal of the game – then put the game to bed as Limerick eventually ran out comfortable seven-point winners in front of the 27,141 in attendance.

Highlights on #TheSundayGame from 9.30pm

Gillane’s second goal was the pick of the bunch. The in-form Limerick corner-forward jumped high above Cathal Barrett, before turning the Tipperary defender, blasting home from close-range, and putting nine points between the sides.

Next Sunday, Limerick will face Clare in their final game of the Munster round-robin, which will decide who tops the group and secures their place in the final. The Treaty are guaranteed at least a third-place finish and place in the All-Ireland knockout stages.

Tipperary take on Cork in Thurles in two weeks’ time in what could prove to be a dead-rubber battle to avoid a dreaded last-place finish. 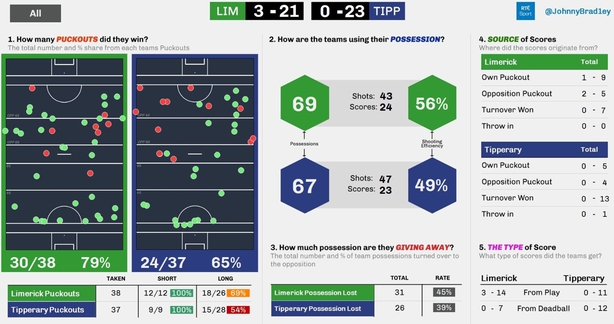 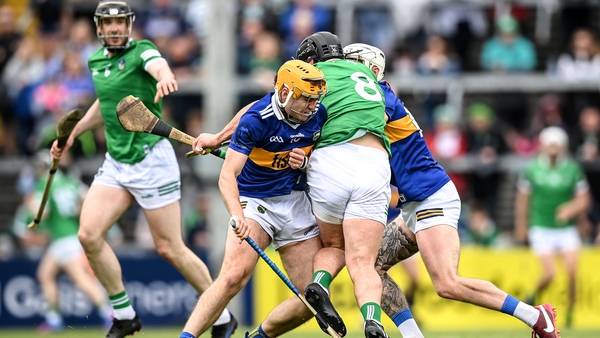