Kerry eased their way back into the Munster final after a 12-point victory over their old rivals from Cork in a resplendent Páirc Uí Rinn.

To be fair to the Rebels, the game was extremely competitive for 50 minutes before the Kingdom kicked for home as they outscored Cork by 0-12 to 0-01 across the last 20.

Key to that Kerry dominance was the introduction of All-Ireland winners Paul Geaney, David Moran and Paul Murphy, who helped pin Cork into there own half during the vital period of the game.

It looked oh so different for Cork when their best forward Cathail O'Mahony kicked his third point of the game top leave his side trailing by the minimum, 0-11 to 0-10, with 50 minutes played.

However, the score in fact proved to be a catalyst for a Kerry takeover as they reeled off the next eight points in a row.

Moran, making his first appearance of the year, looked like he had never been away while Seán O’Shea kicked 0-4 and Geaney, Stephen O’Brien and the two Cliffords, Paudie and David, also split the posts before Cork’s Eoghan McSweeney finally stopped the rot.

Kerry then finished the stronger as the game petered out to its inevitable conclusion with Geaney, O’Shea and David Clifford all scoring again, as did substitute Micheál Burns.

It was a far cry form the opening of the game when Cork, belying their Division 2 status, took the game to their rivals, perhaps inspired by the controversy over the selection of the venue for this encounter.

Stephen Sherlock and O'Mahony showed well up front and a free from Sherlock gave Cork the lead before David Clifford levelled in the fifth minute. Sherlock and Clifford then exchanged scores again before Kerry began to exert control over proceedings.

Pauide Clifford and Stephen O’Brien pulled the strings in the middle third along with Diarmuid O’Connor as the Kingdom outscored Cork by 0-5 to 0-1 from the tenth to the 20th minute. O’Brien and Clifford kicked one each during that time, while Seán O’Shea helped himself to 0-3, with Sherlock again providing Cork’s score.

Cork looked in trouble, but with Seán Powter, a late addition to the team before throw-in, excelling in defence, they fought their way back into the game.

St Finbarr's man Sherlock kicked three in-a-row, the third a beautiful individual effort, and O’Mahony opened his account before Sherlock slotted another free to level the game at 0-7 each with half an hour played.

Cork had chances from there to the break, but Kerry were more economical and scores from midfielder O’Connor and Tony Brosnan gave them a 0-9 to 0-7 half-time lead.

O’Shea extended that lead immediately on the resumption, but Cork were enjoying their best period of the game. O’Mahony traded scores with O’Shea, before successive scores from Kevin O’Donovan and O’Mahony left just one in it.

It was then time for Jack O’Connor to call on the cavalry, and from there to the end there was never any doubt over the result as Kerry eased away to again condemn Cork to the qualifiers.

Kerry will play Limerick or Tipperary in the decider on 28 May. 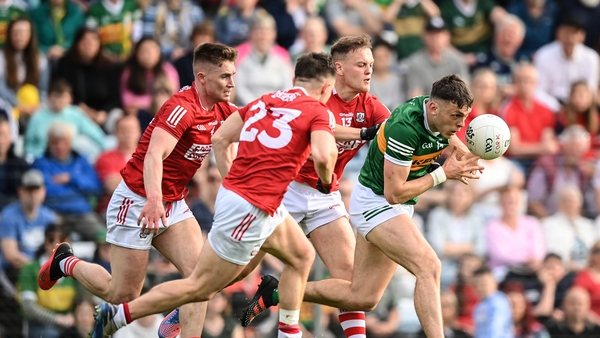