Monaghan cruised through to the Ulster SFC semi-finals with a composed performance laced with an almost perfect return from attempts at the posts, 23 from 25, as they heaped more misery on a Down side recently relegated to Division 3 of the Allianz Football League.

A concerning blemish, in the form of goals conceded either side of half-time, sends them into a last-four tie against either Tyrone or Derry with defensive issues to address, but they will be more than happy with a score-sheet that featured no less than 11 names.

They were always in control of this tie in front of 5,418 spectators, most of them home fans, at St Tiernach's Park, recovering instantly after Pat Havern's goal narrowed the gap to two points early in the second half.

Monaghan were three points up inside eight minutes, Rory Beggan, from a 47-metre free, Jack McCarron and Kieran Hughes all on target.

Ryan McEvoy's crucial tackle on Andrew Woods prevented the home side from inflicting further damage, but with full back Conor Boyle pushing forward at every opportunity, Monaghan were asking all the questions. 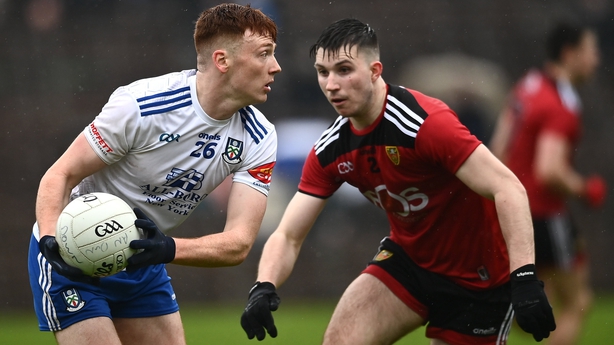 Pat Havern got the Mourne men on the scoreboard in the 15th minute, but they were soon on the back foot again, and struggling to cope with the physicality Kieran Hughes and Gary Mohan brought to the contest.

Both men were on target, and involved in the confident approach play that created scoring opportunities which Andrew Woods and Jack McCarron despatched, pushing Banty McEnaney’s side into a 0-10 to 0-02 lead by the 27th minute.

McEvoy was one of few shining lights for a Down side struggling for ideas and running low on confidence, but the chances be created were largely spurned by a wasteful attack.

They did find the range to pull back scores through Andrew Gilmore, Conor Francis and Conor Poland, but heading for the break, trailed by eight, until Caolan Mooney gave them a lifeline with a stoppage time goal, finishing low to the net from Ryan Magill’s through ball.

Trailing by 0-12 to 1-4 at the break, they stunned the hosts again with a second goal just 14 seconds into the second half, Pat Havern burying his shot past Beggan to leave just two points between the sides.

But Darren Hughes and Niall Kearns reinforced their midfield dominance of Niall McParland and Odhran Murdock to get the Farney challenge back on a firm footing.

Darren Hughes supplied the perfect pass for Conor McCarthy’s point, and Monaghan were on their way again, with Mohan, McCarron and Kieran Duffy also finding the target as they out-scored their opponents by eleven points to three through the remainder of the contest. 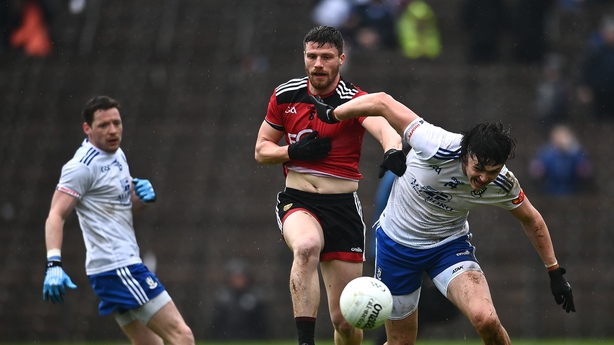 Conor McManus, largely on the periphery of the contest, shot a delightful sore, and there were points from Shane Carey and Conor Boyle to warm Monaghan hearts on a miserably wet Clones afternoon.

James McCarrtan’s side struggled to break through, managing scores on the breakaway through Daniel Guinness, Barry O’Hagan and Tiarnan Rushe, but never getting close to a rampant home side.

Down finished the game with 14 men after substitute Rushe picked up a second booking late on.