Tipperary advanced to a Munster SFC semi-final meeting against Limerick, having successfully weathered Waterford's bright opening on an excellent playing surface in Dungarvan.

The hosts got off to an excellent start, with wing-back Dermot Ryan pointing at the second attempt inside three minutes. From the next attack, instigated by Conor Murray, Brian Lynch sent James Walsh through on goal.

Jason Curry landed his first free of the evening in the 11th minute before Sean O’Connor fired over an excellent point from 30 metres at the river end of the ground on the quarter hour.

Nine minutes elapsed before the game’s next score, with Kennedy doubling his tally for the night. Barely a minute after Bill Maher’s strained hamstring brought his game time to an end, Tipperary found the net, also from the penalty spot when Michael Kiely brought down the onrushing Sean O’Connor.

Conor Sweeney sent Paudie Hunt the wrong way to put the visitors ahead for the first time after 26 minutes.

Between then and the break, Tipperary enjoyed the better of proceedings, as gaps began to appear in a Déise defence which had withstood most of the Premier’s offensive forays during the opening 20 minutes. 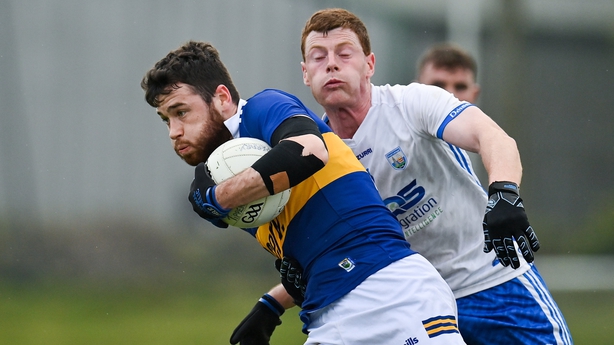 A brace of Mikey O’Shea points in the 30th and 32nd minutes left David Power’s men in command, to the delight of the considerable travelling support.

A stoppage-time free from Jason Curry fell unexpectedly into the arms of Tipp goalkeeper Michael O’Reilly in what was the final act of the half with the visitors deservedly leading by 1-8 to 1-2.

Upon the resumption, Waterford began brightly, with points from Dermot Ryan and Jason Curry (a free) inside three minutes. But between then and full-time, Tipp outscored the hosts by 1-5 to 0-4.

Sean O’Connor, a threat down the left all game long, smartly pointed after 47 minutes with the hard working Conor Murray replying with a point from Waterford’s next attack.

Moments later, on his return from injury, Tipp substitute Steven Ryan dashed from beneath the lip of the stand, 60 yards from goal, to brilliantly find the net and effectively end the contest. But Waterford certainly didn’t throw in the towel, with a brace of Jason Curry frees leaving them five points in arrears after 51 minutes.

But between then and full-time, it was Tipperary who played with the greater rhythm with Conor Sweeney (0-2), Sean O’Connor and Championship debutant Mikey O’Shea all adding to the Premier’s tally.

"Two of our goals at the start of the year were to get out of Division 4 and back into Sam Maguire," said Tipp manager David Power following the full-time whistle.

"That would be huge. And to get three, four, five Championship matches as well when it’s such a young group, something maybe people outside of Tipp wouldn’t realise, it’s a great credit to these lads."

Déise counterpart Ephie Fitzgerald felt his team had produced chances aplenty but lacked composure during their better phases of play.

"The second half we started well again and I thought we were on top for the first 15 minutes and then the (second Tipp) goal was a bit of as sucker punch that set us back but I can’t question the attitude of the lads and their commitment."