After 25 minutes the game was still level.

Dublin were up by 0-06 to 0-03 at half-time and they won by 0-15 to 0-07. It wasn’t all plain sailing for Dublin, no goals scored and the narrowest winning margin in Leinster Championship for them since 2013.

They are due to do it all over again this Saturday. Dublin will be looking to improve their season after a poor league that saw them relegated to Division 2. Wexford will be looking to build on an excellent team performance and victory against Offaly last Saturday.

Where are they now

With injury issues, Dublin were forced to give game time to less experienced players during the league.

A taste of more game-time will have given them more belief to push for Championship places. A v B games in training must have been spicy and heated over the five weeks since relegation last month.

Key players like James McCarthy, Eoin Murchan, Con O’Callaghan, Jonny Cooper were badly missed at the start of the league, in particular. They are all likely to be available for selection this weekend. These experienced players would have been the main drivers in training sessions since the Monaghan loss.

Dublin are sure to have a very similar team selection to last year’s game in Wexford Park. Their trusted systems of play from years of success are highly unlikely to have been changed by Dessie Farrell, merely oiled and polished.

Wexford, however, have been hit by the loss of key players. Team leaders Daithí Waters and Brian Malone have retired. Daithí’s raw physically and athleticism would be missed by any team. While Brian, the best man I have ever seen to win a free, had the ability to bring a rare calmness to those around him even when under the most severe pressure.

In the Offaly game, Wexford demonstrated a togetherness in their attacking and defensive patterns of play. They showed great belief in their gameplan, following it until the bitter end. Wexford were behind for long periods in this game. They conceded a goal at a crucial time. The scores were level in the 47th minute. Despite the obstacles they stayed focused and did what was needed to win.

Forwards work hard to delay and re-direct rather than looking for a big hit or over-commit for a turnover. Donal Shanley would have been known for his kicking skills but now he works his socks off to hassle the opposition.

I was pleasantly surprised seeing Ben Brosnan, a brilliant kicker, score two points that originated from tackles he made in his own half.

As a team they work really hard to get bodies back and protect the central channel in front of goal. Regardless of your position, get back, block space, pick up runners when needed and press on a man and tackle when needed.

There were lapses in concentration such as the Offaly goal but, overall, just like last June, they worked really well as a unit. Clearly they have been well drilled in training by Shane Roche and Anthony Masterson.

In last year’s game, Wexford conceded kick-outs to Dublin. This allowed them extra time to set-up further back the pitch and ensured that they would not be stretched defensively. Wexford followed a similar plan against Offaly, pressing up occasionally after a free-kick when they knew they had time.

Last weekend, Wexford demonstrated that they are well set up to show for short kick-outs. Their go-to kick seems to be to go long, their keeper Darragh Brooks has a massive kick-out. He kicked a number of balls that landed inside the Offaly 45 metre line. There will be plenty of high-fielding opportunities for Liam Coleman and Brian Fenton.

Wexford Park is usually a windy spot. The wind will present a whole new set of challenges in each half for kick-outs and free-takers. Cormac Costello had a torrid time last year kicking frees into the wind.

Against Offaly, Wexford were patient moving the ball forward, sideways and backwards. Committing enough players to each attack but not so many that they would be left exposed at the back. Players like Dylan Furlong made sure that their full back line were rarely exposed one-on-one or two-on-two.

The counter-attacking pace of Kevin O’Grady, Paidi Hughes and Alan Tobin and their ability to get the ball to key shooters like Ben Brosnan caused Offaly all sorts of problems.

Dublin have only lost only one Leinster Championship game in 17 years. Regardless of relegation they will believe that they will get over Wexford. Anything other that that will be a massive shock. Both teams have different targets for the season. Shane Roche is building a squad. After the Offaly win they are in bonus territory, nothing to lose now.

Dublin were a shadow of themselves in the league but there were still rays of light. Fewer individual mistakes and improvement in execution of fundamental skills will go a long way. There needs to be evidence of the improvement this weekend.

After all the claps on the back this week, Wexford will need to be totally grounded and focused to weather the Dublin storm that has been brewing for the last five weeks.

Watch Tyrone v Derry in the Ulster Football Championship on RTÉ2 and RTÉ Player on Sunday from 1.15pm with live blog on all games RTE.ie/Sport and RTÉ News app 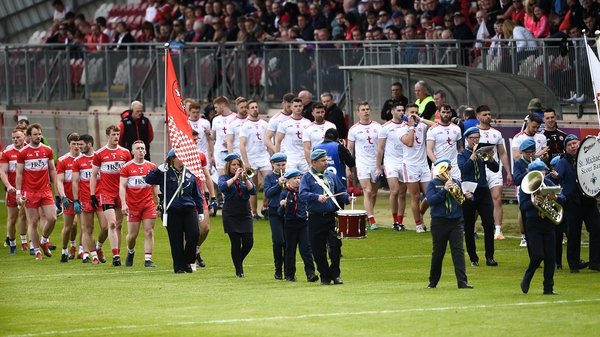 Football SFC: All You Need To Know