The Garden County went goal crazy at Aughrim to book a meeting with Meath next Sunday in the last eight.

Blessington's Kevin Quinn scored a hat-trick either side of the half-time break to help his side record a first victory over the O'Moore men in championship in 36 years.

"Within our group we had huge belief," said the Mayo native.

"We worked very hard over the last number of weeks putting a game plan in place, Gary Duffy and I. We're delighted it came through today, the lads worked extremely hard.

"They were focused, efficient and economic on the ball and we racked up a good score. We spoke about the history attached to this fixture, Wicklow against Laois, and we wanted to honour players that had gone before.

"We felt that restoring pride in the Wicklow jersey was very important to us and we're delighted with that today."

The match marked a third meeting between the counties this year. Laois had won the other two, while Wicklow had gone through managerial change in the middle of their Allianz League campaign.

"It was difficult for Laois to guard against complacency," Costello suggested.

"They had beaten us in the O'Byrne Cup and the league. We felt there was going to be pressure on them today and we went after that. There's a lot of pedigree in our team and we saw our forwards today playing some wonderful stuff.

"The work rate all around the field was a massive factor. Our defence was outstanding.

"We felt it was going to come down to goals today and we know Laois have guys that can register [goals]. We felt it was a case of who would get the goals, and the early ones at that, to plant seeds of doubt in the opposition."

The victory was a third for the Garden County in their last five Leinster SFC campaigns.

With just a week for his players to prepare for the challenge of Meath, Costello says that it will be a case of doing what the can before facing the Division 2 side.

"It's a great day for us. There's a huge amount of talent coming through. There's great work done in the background in Wicklow. Hopefully today will inspire the next generation.

"As the game wore on it got a little bit crazy with cards and blood subs, and it was a bit of a cliffhanger at the end. Ultimately, the way we used the ball, the passing movements and our defensive shape - the lads had worked hard on those elements.

"The middle third was a battle ground there today and we showed showed our desire and will.

"The lads are grounded. We've a recovery session tomorrow and then we'll plan for Meath. It's a boost for everyone involved in Wicklow GAA.

"Hopefully we can push on now and try to get back-to-back performances in the championship."

Costello's opposite number Billy Sheehan offered no excuses, with his side now preparing for a tilt at the inaugural Tailteann Cup.

"I'm not going to disregard how well Wicklow played," he said.

"In the whole game they'd only two wides. They gave an exhibition of kicking. For Laois I'm sure the people in the county won't be happy.

"The county board, the supporters, the players - they won't be happy. The buck stops with me as manager and that's the way it is.

"It was a very, very poor performance, especially in the first half. The boys have done everything right for me so it stops at my doorstep, not anyone else's." 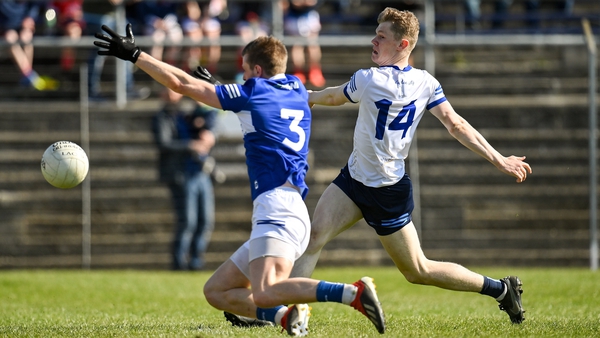