Mattie Kenny’s men appeared to have weathered a second-half Wexford storm when asserting by 0-20 to 0-14 after 52 minutes.

But Wexford were subsequently denied from a penalty and Rory O’Connor also went dangerously close as a bunch of closing Lee Chin frees brought Darragh Egan’s men within inches of salvaging back-to-back draws.

However, Dublin prevailed to boast maximum spoils as they head to Westmeath next weekend.

Dublin made much of the early running in this duel as, with the strong wind in their backs, they responded to a Rory O'Connor ice-breaker by asserting 0-7 to 0-2 with Donal Burke (three) leading the way as full-back Eoghan O’Donnell even got on the scoring act.

Rory O’Connor was ploughing a lone furrow upfront for Wexford after a subdued showing against Galway, and he fired a couple of frees while Connal Flood and Liam Óg McGovern also helped cut the gap to 0-8 to 0-6 after 26 minutes.

Donal Burke remained to the fore as Dublin extended clear by 0-12 to 0-9 before the gap was almost bridged when Rory O’Connor left Eoghan O’Donnell trailing as O’Connor located Conor McDonald alone at the far edge of the square.

But McDonald swivelled before angling a gilt-edged goaling opportunity wide. 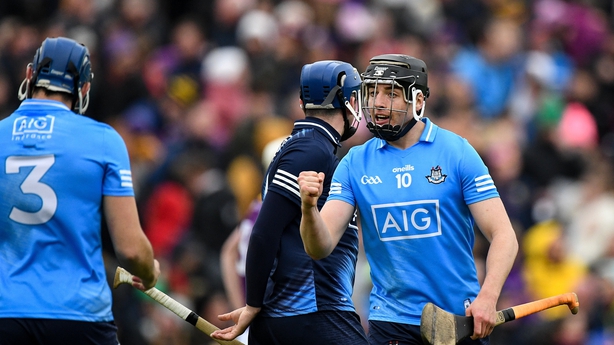 It was tit-for-tat during the early stages of the second-half before Dublin looked to steal a serious march.

Wexford were in desperate need of inspiration, and it first arrived in the shape of a darting run by Liam Óg McGovern to feed Rory O’Connor, who burst through on goal only to force a save, but gaining a penalty having been hauled down.

However, 'keeper Mark Fanning’s lengthy trip proved in vain as, having pointed a similar chance a week earlier, his effort this time was kept out by Seán Brennan’s diving save.

Wexford were suddenly full of menace though and Conor McDonald fielded a Damien Reck delivery before laying off to Rory O’Connor, whose blistering drive saw sub Lee Chin point the resultant '65 on 56 minutes (0-20 to 0-15).

Corner-back Simon Donohoe and Chin (free) had it back to 0-21 to 0-17 before Dublin lost corner-back Cian O’Callaghan to a second yellow-card on 59 minutes.

Chris Crummey, Fergal Whitley and Donal Burke (free) sought to reassure Dublin at 0-24 to 0-20 with two minutes of normal-time left.

But ever tenacious Wexford kept pressing, and three frees from Lee Chin had them on the cusp of avoiding defeat only to run out of time.