Stephen Bennett scorched Cork for 2-11 as Waterford claimed the Allianz Hurling League Division 1 title for the first time since 2015.

Patrick Curran struck the first major in the opening half to set the tone for the Déise, with Dessie Hutchinson firing home their fourth in the 65th minute.

The Rebels, who didn't lead the game after the fourth minute, will go into their Munster SHC opener against Limerick in two weeks' time after a bruising defeat.

A barren run since their last league title in 1998 will continue for another year at least, with a late Robbie O’Flynn goal putting a kinder reflection on the scoreline here.

Momentum swung violently during a first half where 11 different players got on the scoresheet from open play at Semple Stadium.

Cathrach Daly, detailed for a man-marking job on Darragh Fitzgibbon, cancelled out Patrick Horgan's opener with a nice point in what would become a statement performance from the youngster.

The Lismore man kept Fitzgibbon quiet, won several converted frees and assisted a goal, but his limping off late on will be a concern to manager Liam Cahill ahead of their championship clash with Tipperary.

Conor Lehane then found the range for Cork, but Curran and three Bennett frees put extra wind behind the Waterford sails.

Horgan, Shane Barrett and Seamus Harnedy kept the Rebels in the fight, but then came a quickfire double blow for the Leesiders.

Firstly, Curran slotted low to the net after being fed by Micheal Kiely at close range on 26 minutes, before Bennett smashed home another following a Neil Montgomery burst.

Barrett almost stretched the net at the other end just after, but Shaun O’Brien got down to divert away the shot, before Alan Connolly was hooked on the rebound.

The Deise led 2-10 to 0-10 at the interval, and kept their six-point buffer until a contentious moment in the 44th minute where a Curran goal was disallowed when advantage might have been played.

No matter, Bennett sunk the dagger into Cork four minutes later — fetching a long, high ball over Ciaran Joyce before blasting the sliotar past Patrick Collins.

Cork rallied to hit three points on the spin, but they could never quite get within striking distance.

Then, in the 65th minute, Daly made a brilliant burst through the centre of the Rebels defence and handpassed to Hutchinson who buried the ball to the net.

Cork battled on and got late scores through a Tim O’Mahony point and an O’Flynn goal to take the bad look off the scoreboard, but their efforts were in vain.

For a Waterford side shorn of the suspended Austin Gleeson and the injured Jamie Barron, it was a stirring performance heading into the championship. 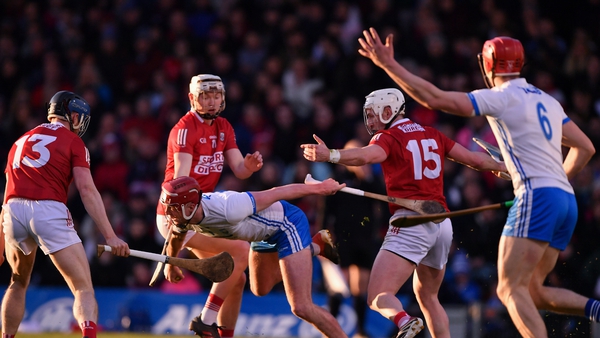