By Dan Bannon at Croke Park

Louth claimed the Allianz National League Division three title for the first time since 2011 after edging past a determined Limerick in Croke Park.

The tense decider swung in Mickey Harte's side's favour in the 54th minute when Liam Jackson found the net.

Harte's outfit topped the table and their season changed in the corresponding fixture against Limerick back in February. The win that day in UL sparked a six-game winning streak for the newly-crowned league champions.

Physicality was felt right from the off as the first real action of the game began with a rugby tackle from Louth full-back Bevan Duffy on Cillian Fahy. Midfielder Fahy would have to go off minutes later but Limerick's top-scorer Josh Ryan duly added to his tally for the season.

In response, Sam Mulroy stroked over his fifth and sixth '45s of the year as the league’s top-scorer got the best possible start to the game.

Louth were running excellent lines and opened up a two-point lead through an excellent Daire Nally score.

Brian Donovan was a huge loss for Limerick but the Treaty men coped quite well without him in running off four points in a row. Louth on the other hand seemed to seize up after missing two goal chances.

Potent corner man Hugh Bourke really stood up in this dominant period for Billy Lee’s side in chalking over two well-taken scores along with Peter Nash in the other corner.

Louth lost their corner-forward Craig Lennon to injury and after 20 minutes without a score Mulroy ended their barren spell in front of the posts with a free.

Adrian Enright was excellent for Limerick and he clipped over his second point of the game before Mulroy once again found the range from a placed ball to make it 0-07 to 0-06 at half-time in Limerick’s favour.

Limerick full-forward Ryan came alive at the beginning of the second half with two scores either side of an incisive John Clutterbuck point but the two sides were well matched and neither could shake each other.

With the contest so evenly balanced, it needed something special to open it up and, with the game on a knife edge, Limerick fatally blinked.

Going back to what has served them well throughout the league, Louth went end to end with a devastating counter-attack.

Corner-back Dan Corcoran began the move with a turnover in his defence, Ciaran Byrne provided the transition and Liam Jackson applied the finish.

The goal stunned Limerick and Louth never looked back. 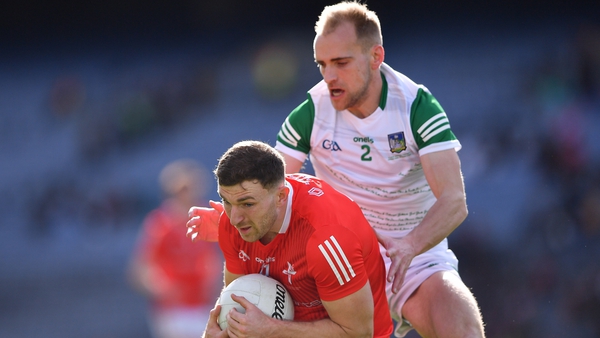