By Paul Fitzpatrick at Croke Park

It may be 'just' a Division 4 league title, but Cavan supporters will be entitled to celebrate this one as the Breffni men picked up a first inter-county title at Croke Park since 1952 this afternoon.

A two-goal haul from young full-forward Patrick Lynch proved crucial as Cavan hung on to pick up their first National League title since winning the Division 2 version on home turf in 1977.

Both sides won their respective provincial championships in 2020 before being unexpectedly relegated to the basement the following Spring. Having achieved promotion, there was a sense that this was bonus territory but as the finish line drew near, the tempo increased and the exchanges were fiercely contested.

Tipp almost snatched it when sub Stephen Quirke smashed a shot off the underside of the crossbar in injury time, but Cavan hung on to avenge their loss at Kingspan Breffni three weeks ago.

When the sides met in the league, Tipperary set up defensively and negated the hosts. This time, the sides mirrored each other to an extent, with the result that defences were on top for long spells.

Cavan hit the jackpot with a superb Lynch goal on 24 minutes which opened a four-point gap but Tipp then strung together four points in succession, three of them spectacular efforts from the right wing by Mark Russell, before a Ray Galligan '45' with the final play of the first half left Cavan ahead.

Conor Moynagh, who played the ‘quarter-back’ role for Cavan, opened the scoring but Tipp were soon ahead through Conor Sweeney (free) and Mikey O’Shea.

Lynch, whose movement was excellent, gathered a Jason McLoughlin pass and converted a mark but Tipperary nudged in front again with a monster 40-metre effort from Kerry native Teddy Doyle.

Gearoid McKiernan (free) and Lynch raised further white flags and when Cavan, playing against the wind, found the net through Lynch, they were in command.

But Tipp came roaring back through Russell’s three and a Jack Kennedy free, and Galligan’s free was all that separated them at the midway point.

On the resumption, Conor Sweeney and Mikey O’Shea pointed but Cavan pulled two back quickly from Sweeney’s fellow 2020 All-Star and direct opponent Padraig Faulkner and a fisted Cian Madden point.

Sweeney showed his class for another two quality scores from pay as Tipp hit the front with 20 minutes to go. James Smith sent over a good score for Cavan but the Munster men weren’t going away and a fourth for the excellent Russell nudged them in front again. When Kevin Fahey thumped over a big score, Tipperary were in the box seat.

But back came Cavan. Stephen Smith threaded over a well-taken score after good work from McKiernan and Lynch converted a pressure free and then, after a brave Jason McLoughlin interception, the 22-year-old attacker raised his second green flag to make it 2-10 to 0-13 with seven minutes remaining.

The closing stages were helter-skelter. Cavan forced numerous turnovers but struggled to convert. Sweeney knocked over two frees, either side of Quirke’s thunderous effort off the woodwork, but Cavan held on for what was only their second win at HQ from 11 appearances at all levels since 1997. 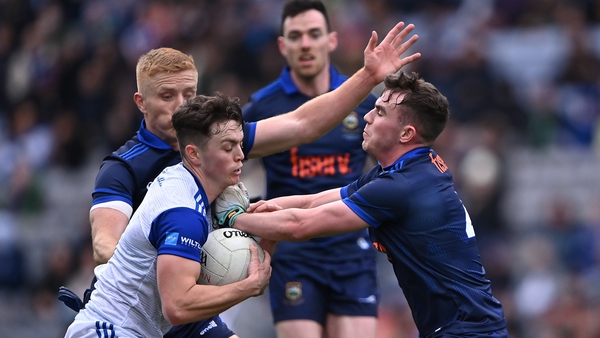