Liam Cahill's charges terrorised their neighbours as the inspirational Gleeson pocketed two goals en route to a 3-9 to 0-10 interval advantage.

And the Déise were unrelenting as they made the league final for the first time since 2019.

But most interest will now centre on Gleeson’s availability for the showpiece (next Saturday in Semple Stadium), which he will miss barring a successful appeal. He was dismissed late on when referee John Keenan consulted with his umpires, after appearing to jab his hurl back into Wexford defender Simon Donohoe following a Waterford wide.

While the sides traded the first two points, Waterford’s appetite for goals become crystal clear as Dessie Hutchinson twice forced early '65s, from the second of which Patrick Curran returned the Deise to the lead after four minutes (0-2 to 0-1).

But the Munster contenders eventually cracked the safe a minute later when Gleeson intercepted a Wexford puck-out and dashed in to arrow home an angled finish.

However, Waterford reasserted command in a flash as Gleeson netted his second goal after good work by Hutchinson.

What a pass from Dessie Hutchinson finished in a top class goal from Austin Gleeson for @WaterfordGAA v @OfficialWexGAA in the Allianz Hurling League Semi-Final #GAANOW pic.twitter.com/YRCNspP70X

And as Wexford hit the self-destruct button – launching a dozen wides – the neighbours ratcheted up the pressure as Gleeson (2), Jack Fagan and Michael Kiely added points before a darting burst by midfielder Darragh Lyons paved the way for Dessie Hutchinson to bag a 3-8 to 0-7 advantage after 29 minutes.

Patrick Curran extended the gap from a free before Wexford gained some solace with closing scores from Paudie Foley (two frees) and teenager Oisín Pepper to close within 3-9 to 0-10 at the break.

The Wexford goal survived a further threat on the resumption, but Waterford were rattling it again on 42 minutes when a length of the field counter-attack culminated in Jack Prendergast stretching the gap to 14 points (4-12 to 0-10).

Patrick Curran made it a 15-point gap as the game was already fizzling out.

Indeed, the biggest Wexford cheer greeted Lee Chin’s first appearance of the season, and he set up fellow substitute Jack O’Connor to peg it back to 4-14 to 0-13 after 55 minutes.

Chin was bottled up in his attempts to land a goal before Shane Bennett sparked an exodus of Wexford supporters amongst the 7,815 attendance when racing in from the right corner to bat to the net on 62 minutes (5-16 to 0-15).

Austin Gleeson’s dismissal followed shortly afterwards, while Wexford lost Jack O’Connor to a second booking in the dying moments - for throwing the hurl at Waterford keeper Shaun O'Brien - as the purple and gold are left to pick up the pieces ahead of their Leinster championship opener against Galway. 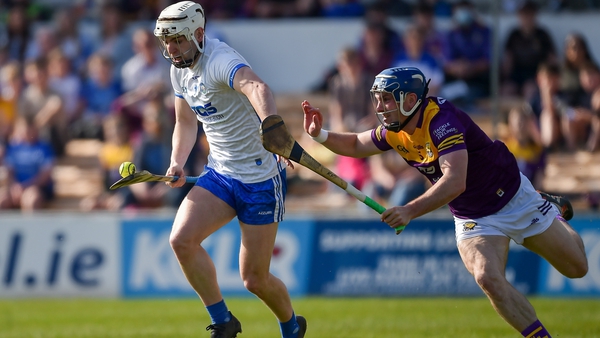