By Kevin Corrigan at Páirc Tailteann

Antrim secured their Allianz Hurling League Division 1 status with an impressive win over Offaly in their relegation play-off at Navan on Saturday afternoon.

It was a convincing display by Antrim who laid a solid foundation against the wind in the first half, responded superbly when Offaly got on level terms early in the second period and then pulled away as it wore on.

The final scoreline is a fair reflection on their superiority and with Offaly expected to be one of their main contenders in the Joe McDonagh Cup, it was a serious marker of intent by the northerners.

They played with greater cohesion and intensity on the day and it is a indication of how comfortable they were that they had their status secured from the three-quarter way stage.

For Offaly, it was a poor and thought provoking display. They tried hard but didn't perform as they needed to and it brings the curtain down on a hasty year in the top flight. 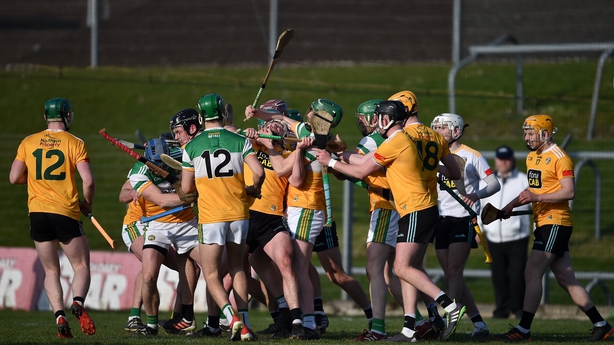 Antrim did the donkey work here in the first half when playing against a stiff wind. They started well with a James McNaughton goal giving them a 1-1 to 0-2 lead after three minutes.

They attacked at pace and for a while, looked like getting goals every time they went past midfield. Offaly goalkeeper Stephen Corcoran denied them on a couple of occasions and the losers were happy to be level at 0-5 to 1-2 after eleven minutes.

It was nip and tuck from here to the break. Antrim led by 1-9 to 0-8 with five minutes of the half remaining and Offaly then produced their best hurling of the afternoon. Eoghan Cahill, David Nally, Luke O'Connor an Jason Sampson fired over quality points in a spell of sustained pressure to level it at 0-12 to 1-9 in injury time.

Offaly would have taken that considering the way the first half had went but it was a different game by the time the half time whistle blew. Antrim struck for 1-2 in injury time with Ciaran Clarke and Keelan Molloy getting points and Molloy racing through for a great goal and a 2-11 to 0-12 half time lead.

Offaly fought hard at the start of the second half. They got back on level terms, 1-14 to 2-11 with 1-2 without reply with the goal coming from a questionable Eoghan Cahill penalty as sub Niall O'Connor was black carded for hauling down Brian Duignan.

Antrim's response was quite brilliant. They tore into Offaly, getting five of the next six points to lead by 2-16 to 1-15 after 52 minutes. It was 2-18 to 1-16 a few minutes later and Antrim had a momentum that Offaly simply couldn't halt. 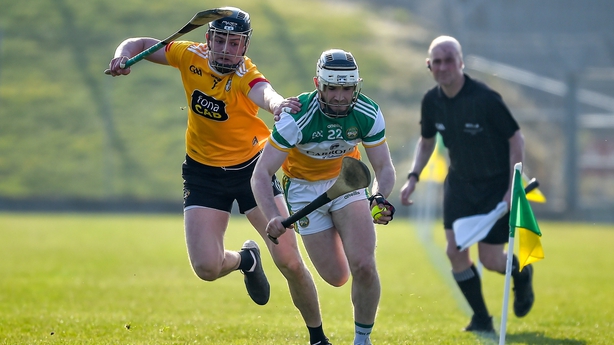 They went for the jugular with Ciaran Clarke and Conal Cunning (1f) pointing to make it 2-21 to 1-16 with eight minutes left.

It was a done deal from here as Offaly corner back Joey Keenaghan was sent off for a second yellow card. O'Connor joined him after getting a yellow to go with his black after an unnecessary melee and an Eoghan Cahill goal from a free was very sparse consolation to Offaly – a Ciaran Clarke penalty goal was disallowed in injury time as he went inside the 21-metre line before striking it home.