Roscommon football manager Anthony Cunningham is relishing a date with neighbours Galway next weekend, knowing that a win will definitely seal promotion back to the league's top flight.

Despite being reduced to 14 men following the dismissal of Keith Doyle after 14 minutes against Offaly, the Rossies went on to record a comfortable ten-point win, an outcome that moved them above Derry in the Division 2 standings. Rory Gallagher's side fell to defeat at home to Galway, a result which secured promotion for the Tribesmen.

The other ticket for a place in Division 1 next season is now firmly in the hands of Roscommon, with Cunningham happy with the way they went about their business in Tullamore.

He told RTÉ Sport: "The aim was to get through today's match. It was nver going to be easy coming to Tullamore. Offaly are a proud county. We got off to a good start and had to work that bit harder when we went a man down so early. Our forwards worked really, really hard, having said that we came through it well. 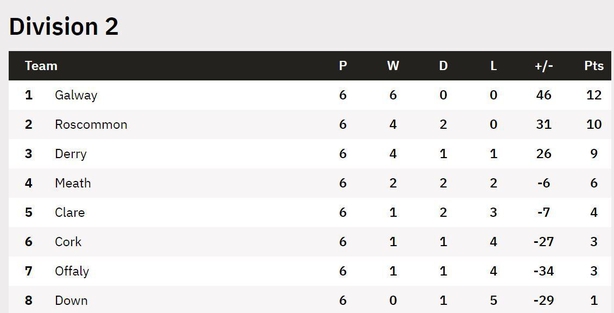 The Roscommon boss was also delighted with the way his side responded to going a man down so early and the overall marksmanship, which did not see a wide registered until the 69th minute.

"I think we held the ball well and because we were a man down we had to do that - if you leave it short and get turned over you'll be punished. The number of wides was where we wanted them to be."

And so to next Sunday at the Hyde. There is a clear target, with Cunningham adding: "We want to win it, have to win it to get promoted. That was our ambition at the start of the year. Galway are a proud county. They probably have as good a 15 players to come in than started today. We know the Galway backroom team really well, they run a great ship.

"Galway are promoted on merit and we want to have a right battle with them."