Antrim started the game brightly with two points through James McNaughton but then began an unrelenting onslaught from what had previously been a blunt Tipp attacking unit.

After hitting just one goal from four league games thus far, and that coming from a Kilkenny mistake, they hit Antrim for five during a comfortable first half.

Kehoe was involved in each of them — scoring two — with his fine performance beginning with an assist for Forde's.

The latter whipped the ball to the net from 16 yards out to register Tipp’s first score, with another major for the hosts coming in the ninth minute.

Barry Heffernan sent in a diagonal which was controlled by Kehoe, and he fed Kennedy to fire past Paul McMullan from a tight angle at close range. 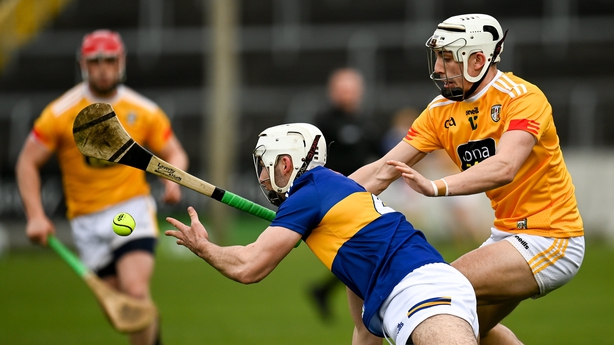 Breen raised another green flag on 16 minutes, taking the ball away from a ruck that had been won by Kehoe, before soloing at goal and batting home.

There was more evidence of confident play from Tipp in the 20th minute when Robert Byrne arrowed a ball upfield for Forde — he turned inside his man and supplied Kehoe for a routine finish.

It concluded a devastating run of 4-3 to 0-3 for the Premier, but Antrim competed strongly for the remainder of the half.

Midfielder Keelan Molloy hit five points in a 20-minute spell during the half — some of which drew applause from both sets of supporters — as seven different Saffrons got their names on the scoresheet.

Nine did likewise for Tipp, with their fifth green flag arriving two minutes shy of the break.

Conor Bowe won a break on the '65 and headed for goal, then fed Breen who in turn transferred the ball to Kehoe to spin and find the net.

The hosts were up 5-10 to 0-12 at half time and, with the result no longer in doubt, they continued to pile on the misery.

John McGrath finished low to the net after an assist by Byrne, while a host of other men in blue and gold raised white flags.

It was all too easy as they racked up 1-12 unanswered before Paddy Burke eventually found the range for Antrim on 58 minutes.

A few minutes before that, the visitors might have had a goal as sub Domhnall Nugent drew a save from Brian Hogan, before the Lorrha-Dorrha stopper repeated the feat from McNaughton’s penalty after Conor McCann had been fouled.

Nugent managed to divert home a consolation goal for Antrim late on, though John McGrath cancelled it out moments later.