Limerick are back in the promotion hunt in Division 3 following a hard-earned one-point win over Laois at MW Hire O'Moore Park.

Two late points from sub Robbie Bourke helped Billy Lee’s side get the better of the home side as they eventually pulled through after a second-half that ebbed and flowed in both ways.

The result means that Laois’s slim promotion hopes have been ended and they must instead beat Longford next Sunday to avoid relegation.

Adrian Enright got the first of his four first-half points early on to put Limerick into the lead but Laois were on top in the opening quarter and with points from Mark Barry, Evan O’Carroll, Sean O’Flynn, Gary Walsh and Danny O’Reilly were 0-05 to 0-03 ahead after 17 minutes.

But Limerick took over from there until half time. Brian Donovan and Paul Maher saw goal chances go astray, both denied by Laois keeper Danny Bolger.

But three from Enright, two from Josh Ryan and one each from Mike Donovan had them five clear. Eoin Lowry pulled one back for the hosts but at half time Limerick led 0-10 to 0-06. 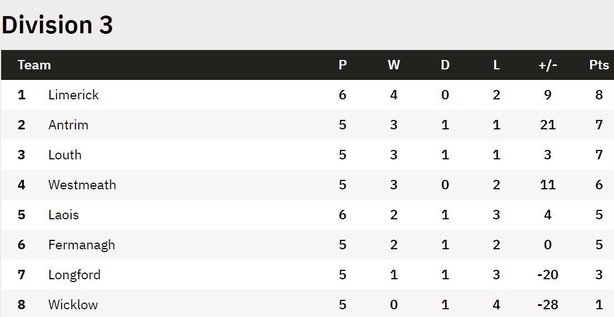 Laois showed great improvement in the second half and hit five on the trot on the resumption to take the lead.

A Josh Ryan free levelled things up and though Mark Barry nudged Laois ahead once again, it was instantly cancelled out by sub Robbie Bourke before Darragh Treacy restored the Shannonsiders' advantage.

Again Laois replied with Mark Barry tying things up once more and a fine score from Kieran Lillis put Billy Sheehan's side in front with four minutes remaining.

A Robbie Bourke free cancelled that out and the Adare man popped up with the winner minutes later.

Laois had a couple of late chances to make a draw of it but all went astray as the visitors held on.

They go top of the table ahead of the remaining Round 6 games on Sunday afternoon.