Jordan Morris struck what proved to be the levelling score as Meath fought back to draw with Down, securing their first point of the Division 2 campaign.

In a game dominated - and at times ruined - by a gale force wind, Down moved three points clear at half-time having played with the elements behind them and then clung on for what is also their first point of the campaign.

A draw suited neither team as both camps had earmarked this as a must win game after back to back defeats in Rounds 1 and 2.

Pat Havern struck 1-03 for Down while Andrew Gilmore contributed 1-02 though all of their scores came in the first-half with Meath outscoring James McCartan's side by 0-03 to 0-00 in the second-half.

Down will probably kick themselves for not finishing this one off as Caolan Mooney had two great chances to win it at the death.

He had the ball whipped off his toe by Padraic Harnan as he lined up a shot at goal in the 68th minute and then in the last play of the game fisted a ball off the crossbar. 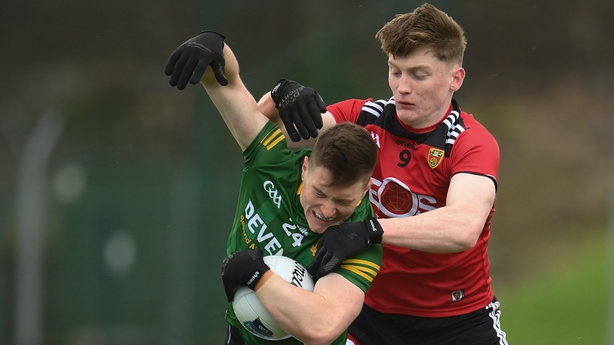 Meath had an opportunity to win it too but Morris' attempt at goal from a free on the right ended up being caught by the wind and, bizarrely, going out for a sideline kick just yards away from him.

The Royals will chase their first win of the league when they travel to Offaly next weekend while Down will host Roscommon.

This must have felt like Groundhog Day for Meath who played into a stiff headwind in the first-half for the third game running.

They were beaten by half-time against Galway in Salthill and trailed Roscommon by nine points at the break in Round 2 so staying in touch with Down initially was imperative this time.

The early signs were positive for the hosts who played with plenty of urgency and moved 1-02 to 0-03 clear when corner-back Robin Clarke probed forward for an excellent goal.

Thomas O'Reilly, one of five late additions to the Meath team, played the defence-splitting pass to Morris who displayed quick hands to play in Clarke.

Two minutes later, Down netted themselves through Andrew Gilmore, setting in motion a tit-for-tat scoring encounter that made for an entertaining watch.

Gilmore finished well for his goal after a slick Down passing move which stemmed from a turnover on Meath's kick-out.

Meath goalkeeper Harry Hogan faced a difficult battle to get his kick-outs away safely with the wind howling and the ball holding up into the breeze.

Hogan did convert two frees for Meath at the other end but also kicked a couple wide and dropped another short.

Jason Scully's 20th minute goal, after a series of slick passes involving Donal Keogan and Mathew Costello, nudged Meath back ahead but, again, there was an immediate Down response in the shape of a Havern goal.

Gilmore and Darren O'Hagan tagged on Down points to leave the Mourne 2-06 to 2-03 clear at half-time - but would a three-point lead be enough with the wind now facing them? No, as it turned out.

The second-half played out upon anticipated lines; Meath doing their best to reel in Down and the visitors getting everyone behind the ball in an attempt to protect their lead and to run down the clock.

As the wind increased, the quality dipped and just three second-half points were registered, all by Meath.

All of them came from frees as two former powerhouse football counties engaged in an arm wrestle to avoid finishing the day rooted to the foot of the Division 2 table.

Shane Walsh and Morris converted the second-half frees for Meath and it was Morris' 60th minute point that ultimately proved the leveller.