An appeal on behalf of four Tyrone footballers dismissed against Armagh recently is possible after the GAA upheld their suspensions in last week's Allianz League clash.

But their appeals against red cards issued were unsuccessful. The four players were dismissed by referee David Gough for partaking in a melee in the keenly contested local derby on 6 February.

Tyrone do have the option of appealing to the GAA’s Central Appeals Committee but it will be a tight turnaround to have any players potentially cleared for the weekend.

As it stands all players are set to miss at least one league game and those suspensions would be invoked against Kildare at Healy Park this Sunday.

The 2021 All-Ireland champions have one point from the opening two games of their Division 1 campaign, having drawn at home to Monaghan before their loss in Armagh.

Meanwhile, Armagh's Greg McCabe was also issued a red card and RTÉ Sport understands that McCabe’s hearing will be held on Wednesday night. 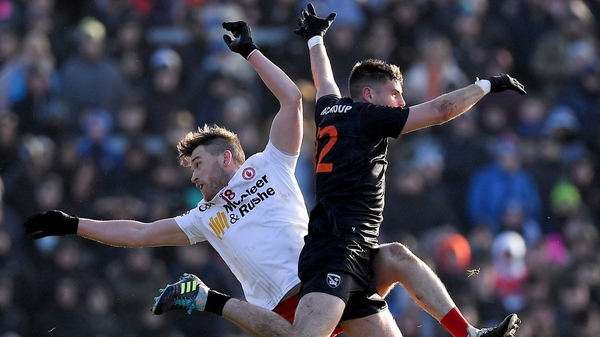