It's just 158 days since Meath caused a sensation by claiming the All-Ireland Ladies football title.

A remarkable success which not only saw the Royals beat a Dublin side aiming for a five-in-a-row but winning a senior crown at the first time of asking, having just come up from the intermediate ranks.

There's no time to rest on laurels now though with the Lidl National Football League kickstarting again this weekend with Meath taking on the code's most successful county and the side they stunned in last year's semi-final, Cork, on Saturday, before further group games against Waterford and Dublin.

"We have to park 2021 now. We can't think about it going forward. 2022 is a new year and a lot of people don't remember that we are coming up from Division 2," Monica McGuirk told RTÉ Sport, adding that the main focus is to progress from their tough group.

"Although we're All-Ireland champions, we have been in Division 2. So Division 1 football is going to be a completely new challenge to us and that's our main focus right now. It's one game at a time.

"We've Cork on Saturday and that's going to be a monumental battle for us. We know what Cork bring to the table and we know how tough it's going to be but we just need to focus on one game at a time."

But there's still an element of letting the events of 5 September 2021 sink in and understanding the scale of the achievement. 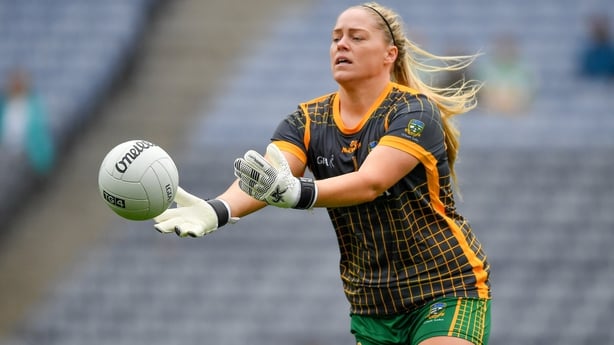 "I don't know if I go as far as to say your life has changed but they do say when you win an All-Ireland medal, your life does kind of change," said McGuirk.

"It was an amazing couple of weeks and still up to now it's been an absolutely fantastic experience and I'm very honoured and privileged to be in a position to be able to say I have an All-Ireland medal.

"When we did win it and went back to Trim that night, we really did see the effect we had on the county. Every single person you turned around to, you knew. People from all around the country were texting you and saying congratulations.

"I don't think we just had the effect on Meath, I think we had an effect all over Ireland."

McGuirk feels the success is already inspiring the younger generation in Meath to take up sport.

"All the boys and girls want to play for Meath. To see that knock-on effect it's after having for all the younger boys and girls, it's absolutely fantastic and we hope now come Saturday we will be able to fill that stand at Páirc Tailteann," she said.