RTÉ hurling analyst Anthony Daly believes that it's time for Limerick's younger attackers to stake a claim for a more regular place in the team after the All-Ireland champions fell to a league defeat to Wexford.

John Kiely’s men suffered a surprise 1-11 to 0-11 loss to the Model County on the opening day of the Allianz National Hurling League.

Limerick were disappointing in front of goal and shot 10 wides in the first half alone, with Aaron Gillane replaced by Seamus Flanagan at half-time.

With Peter Casey and Barry Murphy both sidelined for lengthy spells with cruciate knee ligament injuries, Daly warns that Limerick could find themselves light up front and that the younger attackers who are being given an opportunity need to start proving themselves.

"I think some of the lads who are getting chances better be taking them fairly lively and better be doing like Colin Coughlan is doing," the Clare man said on the RTÉ GAA podcast.

"He’s been solid in the Munster League and he was very good again yesterday. All their backs were good, but up front there’s some lads that are getting a chance that have been close in the set-up, not quite there and have featured as subs. They won’t get that many chances.

"If I had a concern for John Kiely, and I wouldn’t be overly concerned because we know who has to come in, but what I would be a little bit concerned over is that Peter Casey won’t be there. How good is Peter Casey? Brilliant.

"Graeme Mulcahy is getting older and older, very good for Kilmallock obviously, but got married now and is Graeme going to be able to deliver?

"We’ve always looked at Limerick over the last few years and asked which three from four will he put in, and Seamie not making it last year and then made it this year. With Peter gone, Kiely just doesn’t need a drop-off in form." 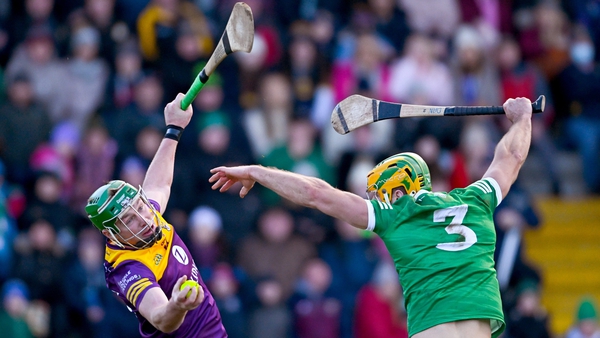 Wexford cause shock against wasteful Limerick