A second Dublin wash-out in a week leaves more questions than answers for Dessie Farrell after Kerry blew the visitors away in atrocious conditions in Tralee to get their first win of the Allianz League in fairly emphatic fashion.

Farrell said afterwards that it had been a 'tough' night for his charges.

Even though Kerry only scored a single point in the entire second half, context is needed. Kerry won this game in the first half, and they took a 13-point lead to the interval, and thereafter it was a fire-fighting exercise from Dublin.

That they won the second period by 0-07 to 0-01 will be of very small solace to Farrell. Dublin looked in as much trouble tonight as they did after their first-round loss to Armagh.

For Kerry it was almost all good, so good in fact that they could afford the luxury of a missed penalty from David Clifford in the first half.

The penalty miss came just after Sean Bugler had pointed for Dublin to have them trailing 0-04 to 0-05, and it prefaced a Kerry assault on the Dublin posts in the driving wind and rain.

Dublin did have the ball in the Kerry net in the first half when Dean Rock's shot went in through a combination of the post and Shane Murphy’s hand, but a foul by Niall Scully in the build-up saw him black carded and the goal scratched off – even if it appeared that referee Conor Lane cited the wrong man.

It was a let-off Kerry were happy to play, and thereafter they went to town on the Dubs for the remainder of the half.

In the 26th minute, Loran O’Dell overcooked his pass to Rock with just Murphy providing the Kerry cover at that stage, but Kerry weren’t nearly as wasteful.

'Normal' service has been resumed.
But there's nothing normal about some of the scores David Clifford kicks. Even with the wind at his back this is special#rtegaa
📺Watch live - https://t.co/AKAre5FHdN
📱Live updates - https://t.co/KkRyBPkT2L pic.twitter.com/z3UpEib81F

Points from Moynihan, Paul Geaney, David Clifford (two) and a Sean O’Shea free made it 0-12 to 0-04 and then David Clifford’s handpass into Moynihan got the finish it deserved - a right-footed shot to the top corner of Comerford’s goal that made it a 12-point game on the 35-minute mark.

The half finished with a Geaney point, a Jack Barry black card, and Dublin reeling from a 13-point deficit going to the dressing room.

Thereafter the game petered out with black cards for Tom Lahiff and then Paudie Clifford, while Ciaran Kilkenny, Brian Howard, Brian Fenton, Ryan Basquel and Dean Rock (three frees) restored some bit of respectability for Dublin in what was their second wash-out in a week. 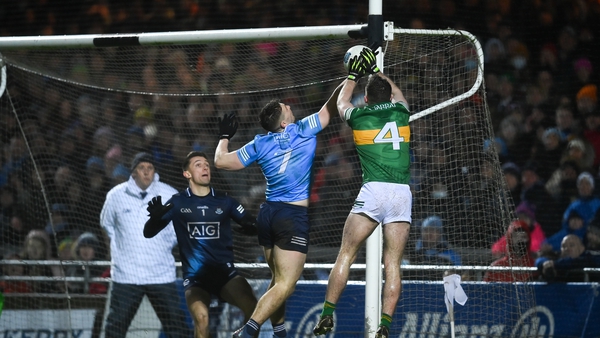