First half goals from Rian O'Neill and a cheeky lobbed effort from Jason Duffy saw Armagh race into an improbable nine-point lead at half-time, their defence confining their illustrious hosts to a mere 0-05 in the opening 35.

From there, they comfortably kept the home side at bay in the second period, the gap never narrowing below five points - though a messy goal hustled home by substitute Lorcan O'Dell gave the Dubs the faintest glimmer of hope with ten minutes remaining.

Armagh's defence was widely pegged as a glaring weak spot in the team after they shipped 4-17 in last year's Ulster semi-final against Monaghan, conceding all four goals in the first half and eventually losing by two points despite their attack racking up 2-21.

However, McGeeney argues the criticism was over-stated at the time and failed to take account of key absences in their full-back line.

"They (the defence) did well now. Credit to (Ciaran) McKeever for that, he's been working on them," McGeeney told RTÉ Sport after the win.

"We were a wee bit unlucky last year. We lost Paddy Burns and Aidan Forker for that championship game (against Monaghan) and everyone had a pop at us over it. I thought they did very well tonight, just a bit unlucky with the goal.

"I think if people would actually look at the stats, we haven't been doing too bad. We were missing two of our full-back line last year.

'We got the balance right today' - Armagh manager Kieran McGeeney particularly pleased with his team's defence and counter-attacking in their win over Dublin #rtegaa pic.twitter.com/Ivajby2YvL

"It's funny the game that was in it, I've seen people talking about how you could drive a bus through our defence, even though Monaghan would be seen as a very good defensive team, we scored the exact same as them bar one point, and yet the same thing isn't applied (to them).

"We had a full-deck to choose from today and it made a big difference for us."

In addition to their defensive solidity, Armagh were considerably more economical in attack than their opponents and McGeeney was particularly pleased by their counter-attacking display.

"We got the balance right today. We've a fair bit of pace in our team as well. We picked up a few injuries today, which isn't good, but listen everybody put in their shift.

"I was happy with the way we played, especially on our counter, we were able to bring pace into our game, as well as kicking so happy with that." 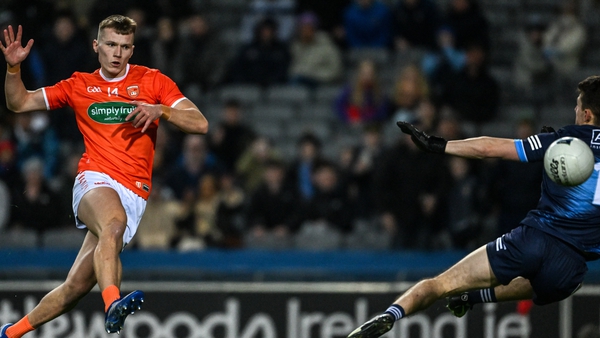