All-Ireland champions Tyrone began 2022 with a 15-point loss to Cavan in their Dr McKenna Cup encounter in Kingspan Breffni Park this evening.

The reigning All-Ireland champions, who have dominated Ulster's pre-season competition for most of the past decade, included just four of the starting XV from September's victory over Mayo in their line-up this evening.

The 2020 Ulster champions had a team more approximating to their first team and they powered to an easy victory here. Gearoid McKiernan was to the fore, notching 1-04 in total, lashing home a goal shortly before half-time to push the hosts' lead out to 1-08 to 0-02.

Crosserlough's Paddy Lynch lobbed over 0-04, with Gerard Smith and Cormac O'Reilly grabbing 0-02 each. Tyrone finished the match with 14 men as Richie Donnelly was sent off midway through the second half.

Enda McGinley's Antrim reign got off to an impressive start with a two-point win over Down at Páirc Esler.

The away side led by a point at the break despite Ryan O Higgins' early goal for Down. Paddy McBride rattled the net for Antrim as they opened up a four-point gap.

James McCartan's side rallied to level the game at 1-09 apiece in the final 10 minutes before a flurry of points from McBride, Conor Murray and Ryan Murray pushed Antrim over the line.

In the McGrath Cup, Brian Hurley shone once more as Keith Ricken registered his second win as Cork manager, with nine points to spare over Waterford at Páirc Uí Rinn. 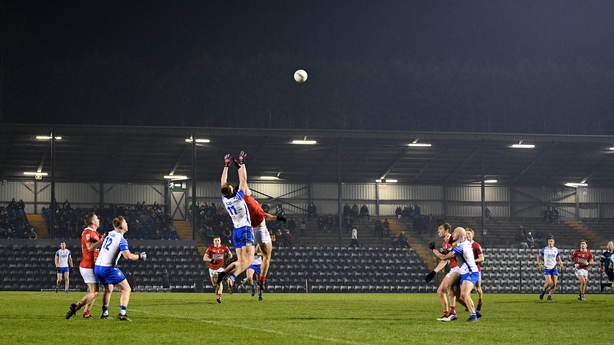 Hurley struck 1-06 with Dan Dineen adding 0-04 in their 1-18 to 1-09 win. Waterford, under the manager of former Cork ladies supremo Ephie Fitzgerald, finished strongly, Darragh Corcoran rattling home a fine goal in the second half.