The Gort player, who turned 33 in August, said it was an "honour and privilege to represent Galway at senior level" but the effort "has also taken its toll on the body and therefore the time has come for me to turn the page."

Harte enjoyed All-Ireland success with Galway at underage level, scooping a minor title (2005) and U21 title (2007) and was initially drafted into the senior squad by Ger Loughnane in late 2007.

However, he had to wait until 2010 before making his inter-county debut. Initially deployed as a forward, Harte ultimately found a settled position in the half-back line as Galway continued their push for All-Ireland success.

He was an ever present in the half-back line in Galway's annus mirabilis in 2017, helping the team to league and All-Ireland glory, securing the latter after a gap of 29 years with a three-point win over Waterford in the final. 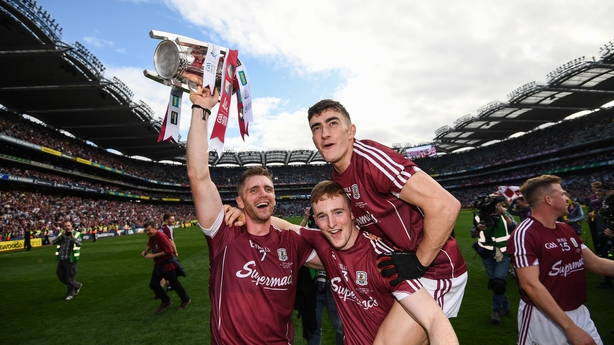 Harte was still in the side the following year as Galway's quest for back-to-back titles came up short against Limerick in the final. He finishes his inter-county career with three Leinster titles (2012, 2017, 2018), three Allianz League titles (2010, 2017, 2021) alongside the Liam MacCarthy success in '17.

In his retirement statement, he thanked his family, friends, coaches and teammates for their support, along with the GPA.

"Being in a position to share the field with and against some of the greatest players ever to play the game along with getting the chance to showcase our sport worldwide has provided me with memories I will forever cherish and making many friends during those times," he wrote.

"The Galway supporters have been phenomenal, making huge sacrifices to support us on our journey. Now I look forward to being one again, willing on the current management team and players every success in 2022 and beyond."