The final 15 was revealed at the TG4 All Star awards banquet, in association with Lidl, at Dublin's Bonnington Hotel.

Seven of the eight Meath players honoured are first-time winners, on the back of an historic season which saw the Royal County win a maiden All-Ireland senior title.

Meath lifted the Brendan Martin Cup on 5 September, less than nine months after winning the intermediate title, while 2021 also saw Eamonn Murray’s team claim the Lidl National League Division 2 crown, and promotion to the top flight for the 2022 season.

Runners-up Dublin have claimed three All Stars, with Leah Caffrey claiming her third, while Orlagh Nolan and Hannah Tyrell are first-time winners.

Cork duo Erika O’Shea and Hannah Looney, along with Donegal’s Geraldine McLaughlin, are other first-time Awinners, while Mayo forward Rachel Kearns earns her second award, following her previous win in 2019.

In total, there are 12 first-time winners on this year's team, with McGuirk and Kearns the only survivors from the 2019 selection.

There are three pairs of clubmates on the side, with Aoibhín Cleary and Máire O’Shaughnessy from Donaghmore/Ashbourne joined by Vikki Wall and Emma Duggan from Dunboyne, who retained their Meath senior club title last weekend.

Leah Caffrey and Hannah Tyrrell, meanwhile, are both members of the Na Fianna club in Glasnevin, Dublin. 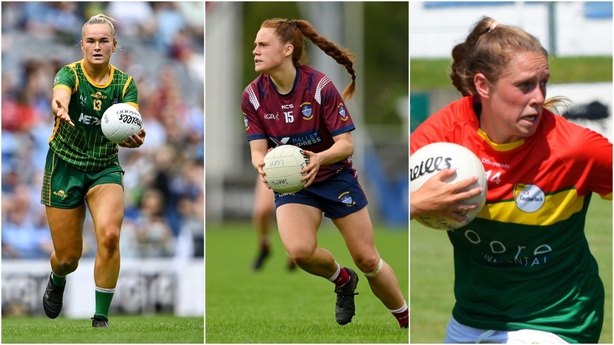 Wall was superb in an attacking role for Meath during an historic season for the county.

The Dunboyne star (23), scored 1-06 for Meath during the championship, and she produced a player of the match performance in the final victory over Dublin.

Wall's acccolade came after she was Intermediate Players' Player of the Year winner in 2020.

The Intermediate Players’ Player of the Year award went to Westmeath’s Sarah Dillon.

From the Milltown club, Dillon was Player of the Match, scoring 1-06, as they accounted for Wexford in September's intermediate decider.

And while Carlow lost out after extra-time in their All-Ireland Junior semi-final against Antrim, star forward Clíodhna Ní Shé was voted by her peers as the Junior Players’ Player of the Year.

Ní Shé was top scorer in the 2021 TG4 All-Ireland Championships with a remarkable haul of 9-19.