An incredible Laois Senior Hurling Championship final ended in glory for Clough-Ballacolla and heartbreak for Borris in Ossory-Kilcotton as Stephen Maher's 14th point settled a thrilling contest and ensured that the Bob O’Keeffe Cup would stay in the Clough-Ballacolla clubhouse for the coming winter.

Just 12 weeks ago, these two sides met in a delayed 2020 decider where Clough-Ballacolla were much more comfortable winners, but they were pushed to the very end by Borris-Kilcotton, who looked like the more likely victors for long stretches of this contest, particularly in the first half.

Both sides came into the final with a perfect record in this year's campaign, four wins from four games, but there was a marked contrast in the sharpness and energy of the two sides in the opening exchanges, as the Tipperary-border club exploded out of the blocks with a string of superb points.

PJ Scully, Aaron Dunphy and Joseph Campion were all on the mark with some superb scores from distance as the first six points of the game were all fired over Cathal Dunne’s crossbar.

It took an excellent point from Willie Dunphy, struck from right underneath the main stand, to get Clough-Ballacolla off the mark in the ninth minute, and from then on the champions settled into what was an end-to-end battle that saw the lead float around the six-point mark right up until the the 27th minute, when Clough-Ballacolla made a mini-surge.

Willie Dunphy was again the catalyst as he turned over Stephen Finan and slapped the sliotar over from a tight angle, with Aidan Corby following up with a fine score on the run.

A Maher free reduced the gap to nine, but a wonderful Borris-Kilcotton goal completely turned the tide again before half-time.

Colm Stapleton’s clearance found Noah Quinlan and he turned down the option of an easy point to instead whip the ball across to Daire Quinlan, who rattled the net from the 20-metre line.

Another glorious point from Stapleton made it 1-14 to 0-10 at half-time, but just as Borris-Kilcotton controlled the opening ten minutes, Clough-Ballacolla enjoyed a purple patch immediately after half-time.

Stephen Bergin showed a clean pair of heels to the Borris-Kilcotton full back line to find the net after three minutes, and five minutes later a string of scores had the sides level at 1-14 each.

Just in time, Borris-Kilcotton stopped the rot, and again took control through their second goal.

Noah Quinlan was the provider on this occasion too, with the finish delivered by Stephen Dunphy. This time however, there was no real momentum shift in the game and Clough-Ballacolla were able to keep pressing, eating away at the lead.

Aidan Corby drew them level with three minutes to play, Willie Dunphy was on target with his fifth point from a very tight angle to edge the champions in front for the first time in the contest, and while Borris-Kilcotton drew level, by now all the momentum was with the side from the south-east of the county.

Neil Foyle drew the challengers level, a wonderful solo score from Lee Cleere again nudged Clough-Ballacolla in front, before two contentious frees – the first for PJ Scully to tie the game and the second from Stephen Maher to win it – rounded off the scoring to bring an end to a magnificent encounter. 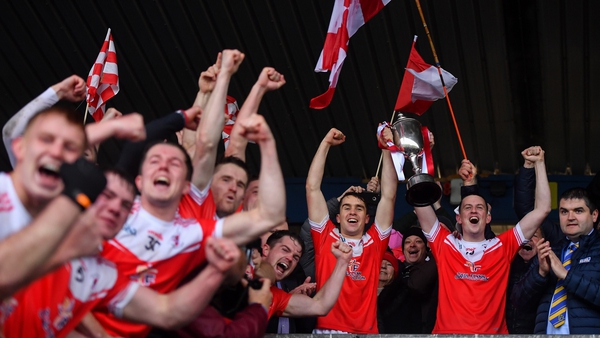