Sinéad Goldrick is in the running for a return to Dublin's starting team for the TG4 All-Ireland final against Meath, while there remain fitness concerns over Carla Rowe, Niamh McEvoy and Siobhan McGrath.

Manager Mick Bohan will wait until later in the week before picking his team for Sunday's Croke Park clash (4.15pm) as the Dubs aim for their fifth All-Ireland title in a row.

Originally named to start against Mayo in the semi-final, Carla Rowe and Niamh McEvoy only featured off the bench and the duo, along with Siobhan McGrath, will be given as much time as necessary to prove their fitness.

"Carla, Niamh McEvoy, and Siobhan McGrath. So the three of them are carrying stuff so we obviously won't know until later in the week how that goes."

Eight-time All Star Goldrick is also in the running to return to the starting line-up.

The Foxrock-Cabinteely defender was injured on AFLW duty with Melbourne Demons back in March but came off the bench in the win over Mayo two weeks ago.

Bohan said she is pushing for inclusion.

"The person she is, not only has she herself under pressure, she’s me under pressure but that’s the nature of the animal," he said.

"She’s probably one of the most competitive people I’ve ever met in sport but we’ve to be realistic.

"She came back from a career-threatening injury and we’ve had to manage her time in training and in-house games so she still hasn’t gone the distance in any of those but she’s done remarkably well considering where she started." 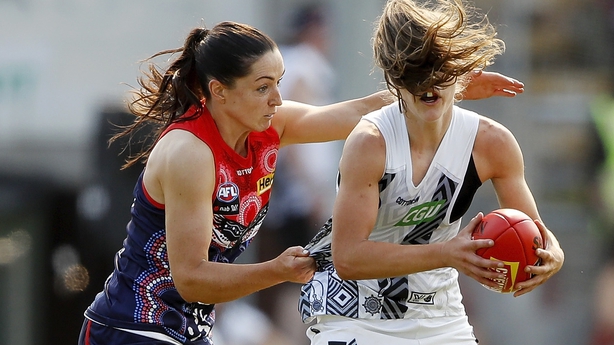 Bohan also spoke about the effect of having players involved in Aussie Rules football with Goldrick, McEvoy and Lauren Magee all getting a taste of football Down Under, three of 14 Irish players who travelled south last season.

"It was interesting at the time when Cora [Staunton of Mayo] went out first that it was almost publicised by the LGFA as a coup that Aussies had come looking for their footballers," he said.

"I’m not quite sure they foresaw what was going to happen next.

"My approach to that has been exactly the same as if someone was going travelling for studies or something like Noelle [Healy] whose career dictated that she couldn’t give the same amount of time.

"Much as they’re here to play football, they’re here to better their lives and I saw the football as enhancing that opportunity for Goldie, Macker and Lauren Magee and we were probably lucky with how the seasons fell.

"It didn’t interrupt hugely although in Goldie’s situation she picked up a really serious injury.

"I don’t see it as my job to curtail people from living their lives fully; in fact I’d encourage it."

Meanwhile, Meath boss Eamonn Murray has reported a clean bill of health amongst his panel.

"We're fully fit, we’re blessed, not one injury all year," he said.

Follow the All-Ireland final between Dublin and Meath (4.15pm, Sunday) via our live blog on rte.ie/sport or listen live on RTÉ Radio 1's Sunday Sport. Highlights on The Sunday Game, RTÉ2 and RTÉ Player from 9.30pm.