Dessie Farrell believes that Dublin put in their best performance of the summer by beating Kildare to secure the Leinster Championship, however, the Jacks manager feels that his side need to improve ahead of the All-Ireland semi-final with Mayo.

The Dubs were evenly matched in the early stages of Sunday afternoon's 0-20 to 1-09 victory over the Lilywhites, however, Farrell's side took a four-point lead into the break and then pulled clear in the second half.

And Farrell was happy with the way that his side managed the performance and he felt that they maintained their consistency throughout the contest, which they eventually won by eight points.

"It's always nice going in with a cushion at half-time," said Farrell, speaking to RTE Sport after the game. "We had one two weeks ago and we didn’t make the most of that.

"I think we did a better job for this game bringing that consistency across the quarters, and we had a good second half as well and pulled away at the end."

Farrell accepted that his side did not have it all their own way and gave credit to the opposition who came with a plan and executed it well at Headquarters.

The Na Fianna clubman was also critical of his team's decision making in the first half, something that he believes was remedied going into the second half.

"Kildare set up with a very definite plan, they were difficult to break down and to penetrate.

"In the first half some of our decision-making around shots on goal wasn't great, so we looked at that and did a better job on that in the second half." 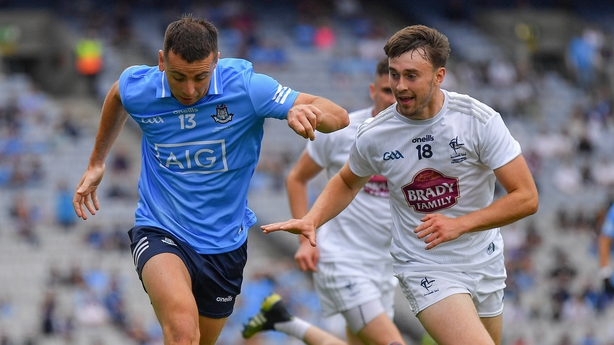 The Dubs manager could also take heart from the fact that he saw key players return to the squad for the business end of the championship with John Small and Eoin Murchan getting time on the pitch after returning from spells on the sidelines.

"It was great to get game-time into the two lads, they had been out for a number of weeks with serious injuries.

"It was great to get them in there, into the fray, and for them to come through unscathed was a bonus."

Looking ahead to the semi-finals, and while this all-conquering Dublin side is just two wins away from making it the magnificent seven in-a-row, Farrell urged caution heading into a game against a formidable Mayo outfit.

"We have been focused on Kildare, the attention turns to Mayo very quickly for us," said Farrell. "They were hugely impressive in the second half against Galway in the Connacht final.

"Very little separates the teams always so we are expecting a huge tussle.

"Today yes, it was the most consistent that we have been, but there is still plenty to work on and we will need to improve as we go on."