Sunny spells with some scattered showers developing in the afternoon. Staying quite warm too with highest temperatures of 22 to 26 degrees, but feeling a little more refreshing in light to moderate northerly breezes. For more, visit met.ie.

Dublin's conspicuous failure to bash Meath to a pulp last weekend added strength to the narrative that Kerry are now finally on the cusp of harpooning the big blue whale.

Darragh Ó Sé, following Kerry-ish best practice, made a valiant effort to dampen that talk in his Irish Times column this week but to no avail. As of now, a Family Fortunes style sample of punters would probably find that a slight majority are tipping Kerry for the 2021 title ahead of the six-in-a-row champions.

After mowing down competitors like Galway and Tyrone in spectacular fashion in the league, things have stepped into a bit of a lull since, as Kerry briskly accounted for Clare and Tipperary in the early rounds of the Munster championship. If anything, an 11-point win over the latter, who fell into Division 4 a month ago, was a tad underwhelming.

Their attacking machine appears to be in fine fettle, with Sean O'Shea, the least publicised burgeoning superstar in the game, stroking over 0-08 while David Clifford lashed home another spectacular goal to the roof of the net.

Nonetheless, they have to be watchful. There was, though it's largely forgotten now, similar sounding talk about Kerry's All-Ireland prospects ahead of last year's winter championship before that suddenly and shockingly turned to ashes in the howling wind and rain of Páirc Uí Chaoimh.

Kerry were afterwards impugned for playing a curiously defensive and inhibiting gameplan against Cork, as if they were war-gaming for a contest later down the tracks - against 'you-know-who' - as opposed to simply playing the match against Cork.

The evidence of the league at least is that they don't appear likely to make the same mistake again and are embracing a far more gung-ho and buccaneering mindset in 2021. As befits the talent available to Peter Keane.

After years of being punch-bags and whipping boys, and that's just in their own county, the Cork footballers rose to sicken their oppressors under the sheeting rain in Páirc Uí Chaoimh last winter. Mark Keane's late, late goal - it couldn't have possibly been any later - was one of the most dramatic championship moments for many a year.

That the shocking result occurred in the first Munster championship encounter in 20 years to double as a knockout game - well that only made it all the sweeter for Cork football supporters.

Since that glorious uprising, humdrum reality has re-asserted itself. Their subsequent Munster final loss to Tipperary was one of the least surprising surprises you'll come across. In the days leading up to that provincial decider, it seemed the world and its wife were muttering on the quiet that they had a fancy for Tipp, partly based on the latent talent within the Tipperary ranks - but also based on an intuition about Cork's long-standing vulnerability. 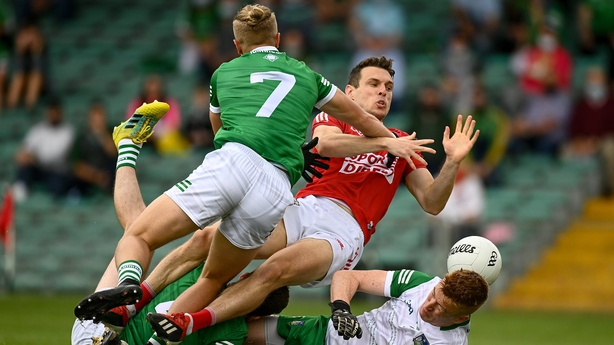 Their league form was so-so, beginning with an alarming home defeat in the Larry Tompkins derby and ending with them just about overcoming Westmeath in a slightly nervy relegation decider.

This form, combined with Limerick's impressive displays thus far in 2021, convinced some they could again be vulnerable heading into the Munster semi-final.

But they comfortably headed off any disaster in the Gaelic Grounds, cantering away to win an admittedly drab game by eight points. John O'Rourke, Brian Hurley and substitute Cian Kiely were central as they pulled away in the closing stages.

Happy to wait for HQ

Sunday's game is the last in the 2021 football championship to take place outside Croke Park, the hosts displaying no interest in transporting the match to GAA HQ, a la the Connacht and Ulster deciders.

It's the first Kerry-Cork championship game in Killarney since the 2017 Munster final, Cork having been granted home advantage three years running as recompense for that period when Páirc Uí Chaoimh was under construction.

The upshot is that fewer will be able to attend the Munster final than the Connacht final earlier that afternoon.

The Kerry GAA authorities were hopeful of convincing the GAA to allow 4,000 into the ground but this appeal was knocked back on Thursday evening - 2,500 will be the maximum allowed into the venue.

Needless to say, the venue makes it an even more daunting challenge for Cork, if that were possible. It's 26 years since Cork last turned over Kerry in the championship in Fitzgerald Stadium, a match which marked the final victory in Cork's lengthy dominance in the fixture, which coincided with the Charlton era. (Cork, in fact, rustled up four wins in Killarney during Kerry's lean years between 1987 and 1995).

Kerry are unchanged from the side that beat Tipp. Cork will announce their team on Saturday night. Cork have one change from the side which overcame Limerick, Cian Kiely replacing Daniel O'Mahony.