The Ulster Championship served up another memorable encounter as Tyrone finished strongly to get the better of 14-man Donegal and set up an Ulster SFC final clash with Monaghan.

The dismissal of Donegal skipper Michael Murphy just before the break had a big bearing on this north-west derby, and while they got themselves to within a point with ten minutes to play, they were unable to stem the inevitable Red Hand surge in the closing stages at Brewster Park.

Tyrone had power and class off the bench, bringing on Cathal McShane, Conor McKenna and Tiernan McCann in the second half, with the trio kicking five points between the, to get their side over the line.

Early on it was Donegal who settled to get a measure of control. 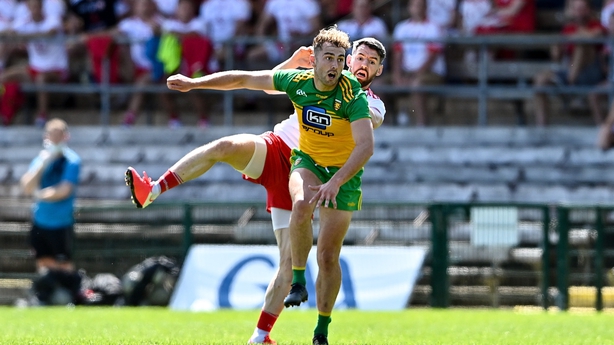 Hugh McFadden was afforded acres of space to surge forward and set up Jamie Brennan's score, with Niall O’Donnell also finding holes in the Tyrone defence to pop a point.

They lost full back Neil McGee to injury inside four minutes, but Michael Langan eased them ahead by 0-03 to 0-01, before Tyrone got to the pace of the game, hitting three on the spin to go in front.

Darren McCurry had a shot kept out by the flying Shaun Patton, but turned the rebound over the bar to bring his side level, and Niall Sludden gave them the lead, 0-04 to 0-03 and scarcely ten minutes played in the baking Fermanagh sun.

The pace never wilted as they reached a welcome water break tied on 0-05 each, after the outstanding Kieran McGeary had cut in to punch over a point.

But the men from the north-west were soon back in front, Paddy McBrearty punishing sloppy defending, before Murphy powered over a 45-metre free, showing no signs of the hamstring trouble that had threatened to keep him out of the game.

Michael Murphy misses a penalty for Donegal in an eventful first half. He has since been sent off.

Watch live on @rte2 or highlights on #sundaygame from 9.30pm pic.twitter.com/RzVsOUjtcb

The Red Hands lost defender Rory Brennan to a 29th-minute black card, and they faced a double blow as referee Joe McQuillan used the cynical foul rule to award a penalty, but Murphy’s kick struck the wrong side of a post and went wide.

What could have been a five-point deficit turned to a one-point gap straight from the kick-out as McGeary squeezed over a gem from wide on the left.

There was more drama for Donegal skipper Murphy, as he received a black card for a challenge on McGeary, and that was followed by a red, as he had already been booked.

Pat Spillane and Sean Cavanagh are in agreement that the decision to send off Michael Murphy was the correct one, even if it should have been yellow rather than black to equal red.

Second half live on @rte2 with highlights on #sundaygame from 9.30pm pic.twitter.com/ztrJTAAptu

Sub Tiernan McCann pushed them three ahead, but in the 40th minute Donegal found a way to cut through a packed Tyrone defence for a brilliant goal.

Hugh McFadden started the move, and it was Eoghan ban Gallagher and Ryan McHugh who injected the pace and precision to send Caolan McGonagle through for a thundering finish past Niall Morgan.

Mattie Donnelly restored the three-point advantage, but Donegal committed numbers forward when in possession, and hit three on the spin to level the game, McBrearty, Michael Langan and Niall O’Donnell displaying unerring accuracy as they made the most of limited opportunities.

Tyrone look to be on the way to the Ulster final. Some of the scores today have been a joy to watch. #rtegaa #sundaygame pic.twitter.com/MKL5nWkj8q

Conor McKenna came off the bench to nudge the Red Hand back in front just before the water break.

Goalkeeper Patton added to the numbers with forays upfield, and they were still very much in the game as McBrearty punished indiscipline with converted frees to narrow the gap to a single point.

Tyrone lost McGeary to a black card on 65 minutes, but they bossed the remainder of the contest, hitting the last five scores, two of them from McCann, to power into the provincial decider.