Kilkenny took full advantage of a depleted Dublin team at Croke Park as they quietly but effectively ground down their opponents to record a comfortable win and pick up their 73rd Leinster senior hurling title in the process.

Dublin started the day as underdogs but the news that four players, including corner back Cian O'Callaghan and full-forward Ronan Hayes, were ruled out due to contact with Covid.

Add in Eoghan O’Donnell’s withdrawal from the crucial full-back berth after just three minutes, and Mattie Kenny was already forced to go deep into the well of players that he might have expected to play specific roles later in the game.

In that context, it seemed like no coincidence that on a warm evening that was likely to sap the energy from the legs of any player regardless of conditioning, Kilkenny turned the screw over the last 20 minutes.

Four of their five subs scored from play, with Walter Walsh, somewhat surprisingly, failing to complete the flush.

Dublin simply didn’t have the depth to compete and once Johnny Murphy stretched his arms out to award a penalty for Jake Malone’s foul on Alan Murphy on the hour mark, Kilkenny’s sixth successive championship win over the Dubs was done and dusted.

TJ Reid fired the sliothar into the bottom corner of the net with precision, Jake Malone was forced to watch the next ten minutes from the sin bin, and Kilkenny eased over the line as a result. 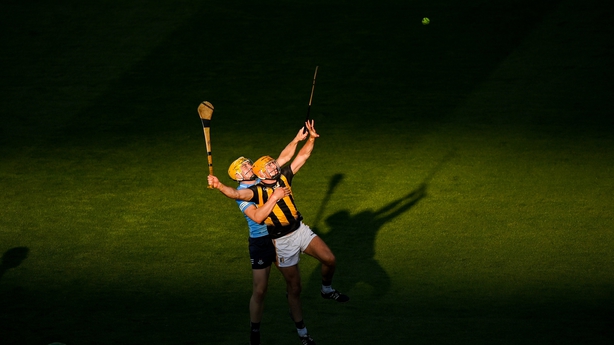 To lose so comprehensively was rough justice for the Dubs, who brought their share of blood and thunder to the fixture, crashing into tackles and holding their own in the contest for loose possession.

They competed well under the Kilkenny puckout and set up plenty of chances, but their accuracy deserted them, particularly in the first half when they shot eight wides, including two goal chances.

Neither was particularly clear cut – Chris Crummey tried to find the bottom corner of the net from 15 metres out but pulled his effort wide of the target by a couple of metres, while Cian Boland was under heavy pressure from Huw Lawlor when he tried to bat the ball in from a tight angle, only to see the sliothar nestle into the side net on the wrong side of the near post.

Even freetaker Donal Burke suffered from the malaise as he was guilty of a couple of misses that were entirely out of character.

Kilkenny didn't threaten Alan Nolan’s goal to the same degree in the first half, but their performance was as efficient and direct as we’ve come to expect.

Adrian Mullen and Martin Keoghan picked off good points from distance, TJ Reid was unerring from dead balls, while James Maher took full advantage of his late call up to the side with an excellent performance that featured three points in total, including one just before half time that helped to make it 0-12 to 0-9 in Kilkenny’s favour at half time.

Dublin’s best play came in a ten-minute spell up to the half hour when they fired four points without reply, Chris Crummey picking off two of them.

Danny Sutcliffe also gave their supporters something to cheer when he produced a magical score, lifting the ball over Maher on a solo run before looping around to collect and finish. 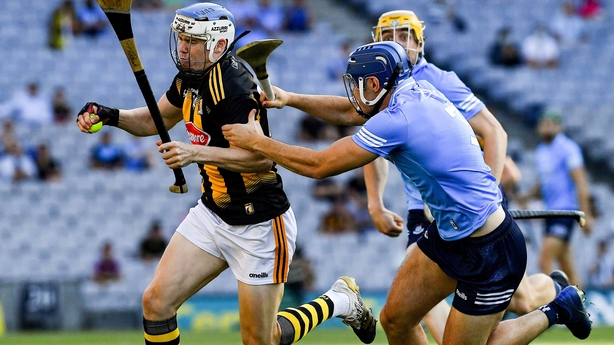 A TJ Reid free got the scoring under way after half-time, Donal Burke and Riain McBride pointed in the space of 60 seconds to cut the gap back to two, but gradually Kilkenny started to impose themselves on the game, with Reid increasingly influential.

He pointed a 65, fed Martin Keoghan close to goal who in turn forced a good save out of Nolan, then won a free in the right corner which he converted himself to push the lead out to five points, 0-17 to 0-12.

The next score was just one more point, but it seemed crucial. Danny Sutcliffe attempted to go on one of his trademark solo runs out of defence, but James Maher was exquisite in his timing as he slapped the sliothar loose and enabled James Maher to split the uprights from 60 metres out.

Maher picked off two more, James Bergin came off the bench to fire a point with his first puck and soon followed up with a second, while Cillian Buckley and Michael Carey all got in on the act – but in the middle of all that, a penalty from TJ Reid was the moment when the contest was well and truly settled.

Jake Malone sin-binned for foul on Alan Murphy and TJ Reid does the needful from the penalty spot. You imagine that is that and Kilkenny are on their way to 73rd Leinster title #RTEGAA
📱 Live updates - https://t.co/RkxL7ZgRV1
📺Watch live - https://t.co/0zsDvxbyTW pic.twitter.com/FtXXPwLceO

Alan Murphy drove in on goal, meeting a crowd of Dublin tacklers.

After he went to ground, referee Johnny Murphy picked out Jake Malone and duly sin binned the Cuala man, leaving Dublin down to 14 men for the remainder of normal time.

TJ Reid’s penalty was inch-perfect, and while Dublin actually got five of the eight points that were scored after that, there was never a danger of Kilkenny’s lead coming under any real pressure.