TV
Antrim versus Laois is live on GAAGO.ie, while the two underage All-Ireland finals are live on TG4.

A sunny day with the potential for a passing, heavy shower - warm.

A huge game for both Antrim and Laois to start off Saturday's action.

The winner will be facing Munster opposition - Waterford, Cork or Clare - in the first round proper of the qualifiers next weekend, with the draw to take place on RTÉ's Morning Ireland on Monday.

The beaten side will be heading down to the Joe McDonagh Cup for 2022, to be replaced in Leinster by this year's winner of that competition.

Kildare's victory over Wexford this week in the U20 Leinster championship was a reminder of what a victory for an outsider (on paper, at least) can do for hurling. The Lilywhites were inundated with well wishes from around the country after the victory at Newbridge. 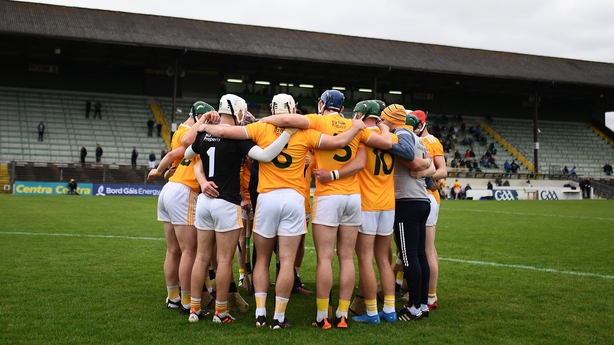 The reaction to Laois' shock win over Dublin two years ago was something similar, while there were also echoes of it when Antrim beat Clare back at the start of the Allianz League.

While some in the football world are clinging desperately to the notion that every county should compete for Sam Maguire - regardless of their standard - the hurling world just wants a few more counties who can realistically compete for Liam MacCarthy.

Laois and Antrim have been two of the counties threatening to mix it up with the big boys over the last couple of years, but one of them will be out of the provincial championships for 2022 (although not out of the race for the All-Ireland) by Saturday evening.

The Saffrons have had an encouraging year apart from a couple of dud displays against the Dubs.

While victory over Galway last weekend might tell us that we all underestimated Mattie Kenny's charges, it's clear that Antrim didn't reach the heights against Dublin - in league or championship - that they had against either Clare, Wexford or even Kilkenny.

Having to return to the Joe McDonagh Cup after such a positive league campaign would be a very disappointing way to end a year where progress has been made.

But Laois are in a similar position. The aforementioned victory over Dublin in 2019 has been followed by four consecutive championships defeats. Bar nearly catching Clare in the qualifiers last year, they've all been fairly comprehensive turnovers as well.

The departure of Eddie Brennan at the end of last year and the return of Séamus 'Cheddar' Plunkett has seen the O'Moore Men lose all their games in 2021.

That said victory against Antrim - and later in the summer against Westmeath in the league relegation play-off - and all would be reasonably rosy in the garden heading into the winter in the midlands.

This one is set up nicely.

Battle of the underachievers?

The 2020 U20 All-Ireland final pits two counties who are pretty much at opposite ends of the spectrum when it comes to success at this age level.

Victory for Cork would see them move clear at the top as the most successful county in the U20/21 age group, while Dublin are appearing in a fifth final but have lost the previous four.

The Rebels last claimed honours in this competition back in 1998, while the Blues are appearing in the decider for the first time in a decade. Both counties need the win for different reasons.

When Cork last lifted Liam MacCarthy back in 2005 it moved them ahead of Kilkenny in the hurling roll of honour. They're now six behind the Cats, and Munster foes Tipperary are closing in behind them having taken three titles of their own in the intervening 16 years.

If the men from the southern capital want to catch those sides at senior level, they need to start producing All-Ireland-winning teams at underage level and this is a great chance for Pat Ryan's side. As John Horgan wrote in the Echo this week, "Cork hurling desperately needs an All-Ireland title victory."

For Dublin, great strides have been made in the small ball game in the capital over the last 20 years as underage sides began to become competitive for the first time in a generation.

It started with the 2005 Leinster minor title, and the county has claimed five more of those since, as well as five U20/21 Leinster titles.

They've reached two All-Ireland minor finals and one All-Ireland U21, but lost all three. Much like Cork, if Dublin want to truly compete at senior level they need to start reaching the summit at underage level.

There's another All-Ireland final from last year to be decided on Saturday as defending minor champions Galway meet Kilkenny for the third consecutive year at this grade.

The Tribesmen have had the upper hand over the Cats in those contests, and are going for a four-in-a-row of titles after beating Cork in 2017. It's also a chance for five titles in six seasons for the westerners.

Between them the counties have played just three matches since the championship started last October, so trying to read too much into form will be difficult. Galway were goal-hungry in dispatching Limerick in the All-Ireland semi-final, while Kilkenny overcame Offaly relatively comfortably at Portlaoise.

Nine of the Tribes players involved in that win over the Treaty City men were also involved in the panel back in 2019, so they have experience.

Watch Leitrim v Mayo and Derry v Donegal live on RTÉ2 (from 1.30pm Sunday) and see highlights of all the weekend's action on The Sunday Game at 9.30pm on RTÉ One.