Dónal Óg Cusack has a degree of sympathy for referee James Owens after his controversial decision to sin bin Aidan McCarthy and award Tipperary a penalty in their Munster semi-final victory over Clare.

The Premier men came out on top in the clash with their neighbours, winning 3-23 to 2-22 but the game hinged on a controversial sin bin and penalty call by referee James Owens in the 38th minute.

Clare led by two points at the time McCarthy was sin-binned for a late and reckless challenge on Jake Morris near the sideline.

Even though the foul occurred more than 30 yards from goals and with a number of Clare defenders present, because it was inside the 20-metre line, Owens deemed it to be a goalscoring opportunity and awarded the penalty. Former Kilkenny defender Jackie Tyrrell described the decision as "ludicrous".

Speaking on the Sunday Game, Cusack claimed that Owens was right in producing the yellow card, even if he did err in some decision making.

"It's definitely a yellow card," he said.

"We know why the new rule is there, it’s brought it with the right intent, we know that there was a sanctuary for cynicism being created within the rules.

"There are a number of items that the referees are told to look at, where was the foul committed? Yes it was inside the '21.

"Secondly, how many defenders were between the defender and the goal? There were plenty of defenders there, so that wasn’t an issue.

"Could another defender make the tackle is the third thing they’re told to look at. Absolutely there were defenders there. 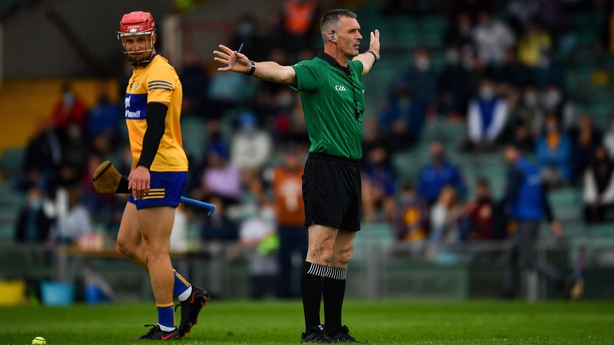 "The key thing here in terms of the game is that Tipperary outscored Clare 2-04 to 0-02 during that period while McCarthy was off, so it had a huge impact on the game.

"In terms of going back to the decision itself, it was the wrong decision, it was a mistake, Clare were wronged and it did have a huge impact on the game."

Dónal Óg Cusack ponders whether the controversial penalty decision or the sin-binning of Aidan McCarthy had more of an affect on the game between Tipperary and Clare. #RTEGAA pic.twitter.com/C4LjugEznN

While Cusack was adamant that the penalty call was wrong and that Clare have every right to feel hard done by, he also has an appreciation for the tough job that referees face each week.

"It was a mistake no question about it but what I will say is that all the tough people on social media that are good at taking cheap shots, how many mistakes were made by players over the weekend?

"Clare are absolutely entitled to feel wronged and I thought Brian Lohan was very fair after the game in acknowledging that the rule is there for the right reasons, but of course feeling aggrieved."