Antrim advanced to the second round of the Bord Gais Energy Leinster U20 Hurling Championship as they accounted for Down, 3-17 to 1-13, at sunny Ballycran.

The Saffrons built a commanding 10-point lead at the interval and maintained that in the second period despite a spirited Down rally with second-half goals.

The free-takers were busy early in this game as Down's Tom McGrattan and Antrim's Daire Murphy hit two apiece, before Declan McCloskey added one from distance to give the Saffrons a ninth-minute lead they would hold until the end.

Rian McMullan hit the first score from play soon after and while McGrattan responded for Down, Antrim were beginning to take charge around the middle and looked much sharper in attack.

With wind advantage, they created plenty of chances, but shooting was to let them down a little with nine wides, although they did began to find their range and held a 0-06 to 0-03 lead at the water break, thanks to two fine Seanie McIntosh points.

Antrim pushed on in the second quarter with Michael McGarry firing over, followed by three Murphy frees. They began to threaten goals with Conal Bohill seeing his poked effort come off the post and then Rian McMullan blasted just over the crossbar.

Down were struggling to make any headway going forward as Antrim's half-back line and midfield were in full control, but did add to their tally with McGrattan kicking over when there may have been an opening for goal.

The first goal of the game would arrive in stoppage time as Murphy cut through and while Cathal Lavery stopped his scuffed shot, McMullan was there to finish the rebound and leave Antrim 1-11 to 0-14 ahead at the break.

With the wind behind them, Down would have hoped for a good start to the second period and a long free from Sean Hughes appeared to do that, but Antrim were in for their second goal as Conal Bohill burst forward, fed Michael McGarry who produced a one-handed finish to the net.

Down did rally and out-scored Antrim by four points to three to trail 2-14 to 0-09 at the water break, but could have been closer only for Stuart Martin's penalty failing to beat Paul Doherty in the Antrim goal.

They did get their goal upon the resumption, with McGrattan's rather tame shot deceiving Doherty, but five minutes later, Antrim replied as substitute Dannan McKeogh did well to keep the ball in on the right and crashed to the net.

The hosts showed plenty of spirit to chip away at the gap, but Antrim's best forward on the night, Rian McMullan, fired over three of the final four points to seal Antrim's win and progression into round two. 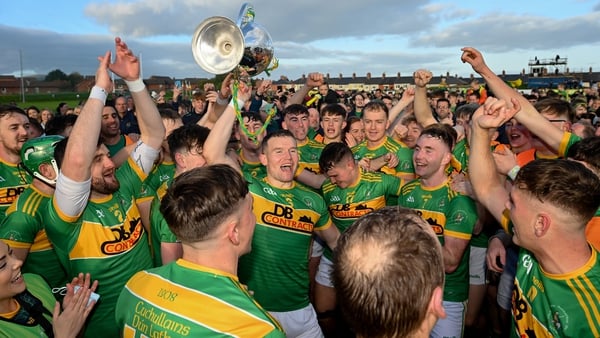