There are seven matches for us to look forward to and with the knockout system in place, seven teams are going to be thrown aside after the weekend and that's going to be tough.

There are a few matches that I think are going to go one way and without patronising people or trying to make an argument for a certain team, I’m going to call it as I see it.

I think Mayo will beat Sligo, I think Kerry will beat Clare and I think Limerick will beat Waterford.

I don’t doubt the ability of Clare, Waterford or Sligo and I’m not trying to be disrespectful but just based on results, form and the ability of the respective squads, I don’t see an upset on the cards.

In Leinster, where everyone has Dublin earmarked as Champions already and we all speak of the Leinster Championship being a bit pointless, I think you’ll find the most competitive and interesting game will be in Leinster this weekend.

Offaly take on Louth at home and having gone into the game with a 100% record, people are questioning how John Maughan went up to Derry and took a 12 point thumping, but I think he was dead right to take on that match.

They could be out of the Championship at the weekend and have a very short summer, he was dead right to take on that match but will they have enough to beat a Mickey Harte trained Louth team.

Louth have had good wins over Leitrim, Sligo and Carlow and they have the boost of having Mickey Harte with them.

It’s a huge game for both teams and I think Offaly might scrape it but they should start Niall McNamee in my opinion.

Wicklow and Wexford went at it down in Wexford last November when Wicklow edged it in the winter.

Wicklow had a horrible league campaign, they lost all their matches until they beat Ulster champions Cavan in a relegation play-off and that was huge for them.

In Aughrim, I’m going to give Wicklow the win here. 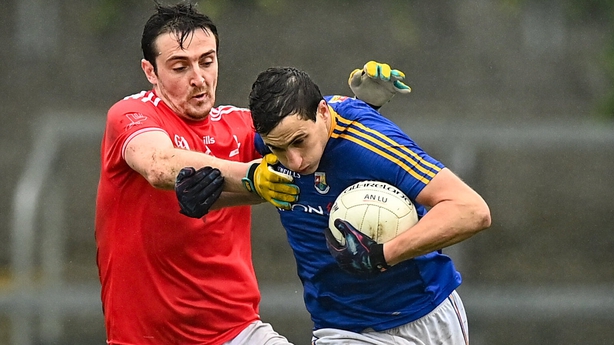 Carlow and Longford will also be very interesting and hard to call. Carlow were competitive in Division 4 but lost by eight points to Louth for promotion.

Longford were very up and down but went for promotion against Tipperary and they won it.

Momentum could play into it but I think it’s a very hard one to call. I’d edge towards Longford but I’m really in between there.

The Ulster Championship gets underway too and we have Down against Donegal.

There have been rumblings that all is not well in the Down camp. Conor Poland walked away and the Johnson brothers of Kilcoo all walked away.

People will always question Down’s style of defensive football and their lack of physicality around the middle but they have great runners – they run everything. Daniel and James Guinness are very, very good at that.

The problem for Down is that you need possession to do that and Down don’t have enough physicality in midfield. If Donegal squeeze up on their kick-outs, I can’t give you an answer on how Down would beat them.

Donegal do have their problems, they have injuries. Eoghan Bán Gallagher, Jamie Brennan, Stephen McMenamin, Michael Murphy, Odhrán Mac Niallais and Oisin Gallen are all injured.

Still, with the squad that Donegal have, they should have enough and a few of those injured will probably feature.

If Donegal are to be serious about winning with All Ireland, they should be looking after Down and I think they will.