Jack McCarron rode to Monaghan's rescue in remarkable fashion in Clones, nailing a 94th minute winning point against Galway to secure their Division 1 status in the Allianz FL for another season.

Trailing by five points late in normal time, it looked bleak for the Farney who outscored Galway by 1-03 to 0-01 from the 68th minute onwards to force extra-time.

They trailed at half-time of extra-time too but battled back again to level terms before McCarron held his nerve to shoot over his seventh and by far most important point of the game.

His booming point from around 35 metres out came four minutes into stoppage time and means Monaghan will remain in the top flight for an eight consecutive season.

But it's disaster for Galway who have been relegated to Division 2 and they will have to pick things up for a Connacht SFC opener against Roscommon on 4 July.

Monaghan will return to duty a day earlier when they play Fermanagh in the Ulster quarter-finals back in Clones.

Incredible score from Jack McCarron to win the game for @monaghangaa in the dying seconds of extra-time of the Allianz Football League Relegation Play-off! #GAANOW pic.twitter.com/oUuPk8OIDs

Seamus McEnaney, suspended from sideline duties for the league, attended the game and sat among spectators in the main stand at St Tiernach's Park.

He was boosted by a bright start for the hosts who moved 0-03 to 0-01 clear thanks to scores from Conor McManus, Rory Beggan and Ryan McAnespie.

Shane Walsh's second point of the game for Galway in the 18th minute tied it up at 0-03 apiece and an entertaining back and forth played out.

Currin man McCarron came on after 11 minutes for the injured Andrew Woods and kicked three excellent Monaghan points from play before half-time.

Karl O'Connell pointed too when his drilled shot at Galway goalkeeper Connor Gleeson was expertly tipped over.

Monaghan deserved to at least be on level terms at the break but two Galway goals left the visitors in pole position, leading 2-06 to 0-09 at half-time.

Paul Kelly struck Galway's first goal in the 18th minute though Matthew Tierney deserved all the credit for a clever kicked pass from right to left across the goals.

Monaghan responded with five of the game's next seven points but the Tribesmen, league finalists in 2018, finished the half strongly.

Robert Finnerty in particular came alive with a point from a mark and then a well taken goal when he was picked out by Kieran Molloy with a precise pass over the Monaghan cover. 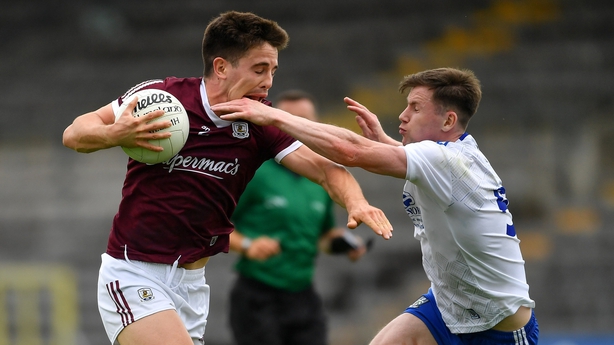 Galway opened up a five-point lead in the third quarter thanks to a series of Walsh points from frees and led for virtually all of the half.

They were boosted by black cards for Monaghan players Darren Hughes and Ward which came almost one after the other, in the 37th and 49th minutes.

That left Galway down a man for two thirds of the half but while Galway dominated the possession in this period they rued a series of wides and errors.

Tierney also hit the bar with an audacious effort from 50 metres after a free was awarded against Monaghan midfielder Niall Kearns when he stopped after winning a Mark despite failing to signal for it.

Galway retained a five-point lead but back to back Ward points for Monaghan in the 68th and 71st minute ignited their comeback.

Monaghan were energised by a 71st minute black card for Galway's Paul Conroy who was dismissed for a petulant ankle trip on Hughes.

Moments later Hughes was picked out by Kearns and nailed the equalising goal.

Tierney thought he'd won it for Galway with a converted 45 but McManus held his nerve after a patient Monaghan passing move in the 75th minute and split the posts, 1-16 to 2-13.

Conroy's return aided Galway who led by a point at half-time of extra-time 2-16 to 1-18 but Monaghan refused to relent and fought back to level terms, teeing up McCarron to stroke over that crucial winner at the death.