This weekend marks the end of an unusual Allianz Hurling League.

Only a few weeks ago we couldn't wait to see the return of some inter-county action, even if former Tipperary hurler Shane McGrath was doing his best to temper our expectations before a ball was thrown in.

Speaking on RTÉ's Sunday Sport early last month McGrath contended that it might be the least important league campaign ever owing to its proximity to championship. Indeed both the Leinster SHC and Munster SHC are less than three weeks away.

But with just one weekend of league action to go, where do we stand?

First things first, Kilkenny are going to top Division 1 Group B. The Cats have beaten all before them, including a comfortable win over Wexford at UPMC Nowlan Park.

This year we're set for joint winners of the National League, so the reigning Leinster champions have that in the bag already, unless they end up meeting the team which tops Division 1 Group A at some point in the summer (more on that later).

Clare host Cody's charges this weekend in Ennis, while Wexford and Dublin will meet at Chadwicks Wexford Park.

The Slaneysiders currently occupy second place in the group, and will finish there if they can avoid defeat in that clash. Their record against the Dubs has been impeccable since Fitzgerald arrived at the end of 2016. That year Dublin had beaten Wexford by 13 points in the provincial quarter-final at Croke Park.

Since then the men from the sunny south east have managed four wins (two Walsh Cup, one Leinster SHC, one NHL) and one draw from five games - and the Blues' league from so far doesn't suggest we're about to see that run ended. 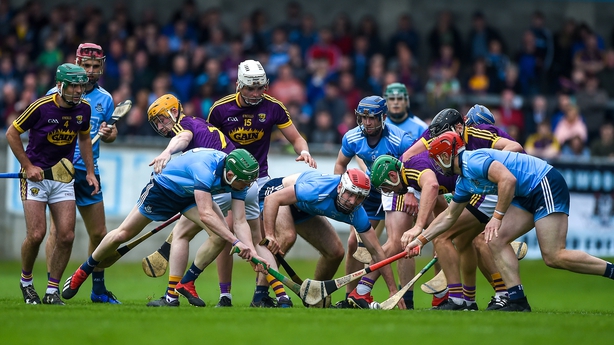 If Dublin were to win then second place would be theirs, barring a triumph for the Banner over Kilkenny at Ennis.

At the other end of the 1B table, Laois are already guaranteed to be bottom of the pile after Antrim's draw with Davy Fitzgerald's Yellowbellies on Saturday.

Cheddar Plunkett's return as manager has been marked by four consecutive defeats and with a trip to what Brendan Cummins dubbed the "GAA's Galatasaray" on RTÉ's Allianz League Sunday to come, they might end the campaign without a point.

Ultimately, the big game for them is a clash with Westmeath in the relegation play-off. The Lakesiders are also certain to finish bottom of their group - Division 1 Group A - with four defeats from four and a scoring difference of minus 89.

The loser there will be replaced by Offaly in the top flight next year after the Faithful's big win over Down on Sunday confirmed their status in Division 1 for 2022. One thing to bear in mind is that the relegation play-off isn't set to take place until August, as a curtain raiser for the one of the All-Ireland semi-finals. 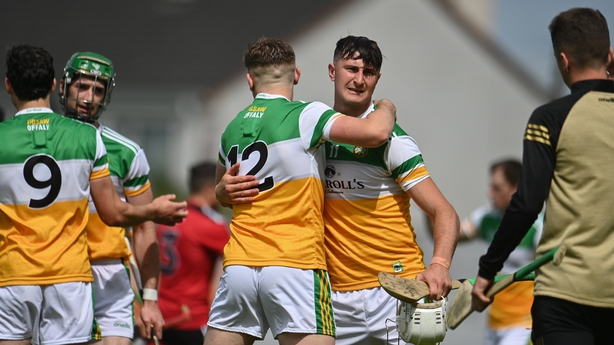 Top spot very much still open in Division 1 Group A

In the other top flight Division things are a bit more interesting, in that first place is still up for grabs. One thing we do know is that reigning champions Limerick can't defend their crown at this stage with three points from four matches so far.

Tipperary are currently top owing to their head-to-head record against Galway. Victory for the Premier over Waterford on Sunday and they will be the joint league champions. That would mean, tantalisingly, that a meeting with old foes Kilkenny in championship would also act as an NHL final.

A draw will also be good enough for Tipp if Galway and Cork finishes all square at Páirc Uí Chaoimh, but the Rebels also can't be ruled out of the equation owing to their strong scoring difference.

Should Tipp be beaten, then Galway can finish in first place as long as they avoid a similar fate against Cork at Páirc Uí Chaoimh. Defeat for Tipp and a victory for Cork would see Kieran Kingston's charges sneak into top spot.

The other game in Division 1A sees Westmeath host Limerick at Mullingar. The All-Ireland champions are just playing for places, and to decide who they'll be hurling against next spring with the makeup of the groups in Division 1 for the next two seasons set to be decided by this year's final tables.

Wicklow are heading to 2B next year even if they beat Michael Fennelly's Offaly this weekend, having lost all of their games so far, including against Meath - the only team they can catch. The head-to-head rule would see the Royals finish ahead of their provincial rivals in that instance.

Who replaces them in 2A will be decided on Saturday at Elvery's McHale Park when Mayo (4 points) host Kildare (6 points). The Lilywhites need to avoid defeat to gain promotion.

Derry and Roscommon are battling to avoid the drop to 3A. The pair meet in Celtic Park on Saturday and a victory for the Rossies is the only way that they can stay in Division 2 - a draw will be enough for the Oak Leaf county.

Promotion and relegation in Division 3A is the only thing that won't be decided this weekend, with a round of fixtures to be played on 19 June, while Louth were crowned Division 3B champions over the weekend, thus gaining promotion.