Super Sean Quigley scored a dramatic flicked point in the 76th minute to tie this thrilling affair in the sun in Brewster Park.

Top-scorer Quigley took a pass from super sub Ultan Kelm, who turned the game around, to punch a late equaliser which sends the Ernemen into a promotion play-off with Offaly.

It looked like gritty Longford had clinched victory with two fine points from Rian Brady and substitute Darren Doherty which overturned a Fermanagh lead of 1-14 to 0-16 at the end of normal time.

Longford were struck a late blow when they lost ace marksman Robbie Smyth to a hamstring injury ten minutes from time.

A draw was probably a fair result in a frenetic entertaining affair.

Fermanagh had a whirlwind start after just 50 seconds when Josh Largo Ellis and Darragh McGurn combined to put Quigley through.

The veteran slid the ball low to the net after turning Longford full-back Andrew Farrell.

They could have had another goal ten seconds later, but Quigley fumbled with the goal in sight.

The livelier Ernesiders continued to dominate and three more frees from Quigley pushed them to a 1-03 to 0-00 lead by the tenth minute.

They should have had a second goal just before that last point as a Tiarnan Bogue flick put Quigley one-on-one with the keeper. He dummied two defenders but his effort was stopped on the line by vigilant Longford midfielder Darren Gallagher.

Longford settled and four pointed frees from Robbie Smyth - and two more from Barry McKeon and Rian Brady - tied matters at 1-03 to 0-06 by the 23rd minute.

The Division 3 North meeting of Fermanagh and Longford in Brewster Park saw the return of crowds to inter-county games, with 500 spectators allowed into this evening's Division 1 North games - @MartyM_RTE reports pic.twitter.com/FPVC8OmUcd

Fermanagh regained the lead through a fisted point from McGurn but the inevitable Smyth levelled matters from a free.

The visitors dominated midfield, but centre-forward Tiarnan Bogue restored Fermanagh's lead with a monster point in the 30th minute.

Fermanagh keeper Chris Snow was then black- carded for pulling down centre-back Michael Quinn as Longford called for a penalty.

Smyth pointed the free to put Longford ahead for the first time as they led by 0-10 to 1-06 at the break.

Longford dominated most of the third quarter and moved into a 0-13 to 1-7 lead by the 46th minute.

Fermanagh then threw on speed machine Kelm for his first match since the Ulster Championship in 2019, and his direct running posed major problems for Longford.

The football was frantic in the final quarter and Longford lost wing-back Gary Rogers to a straight red card in the 67th minute. 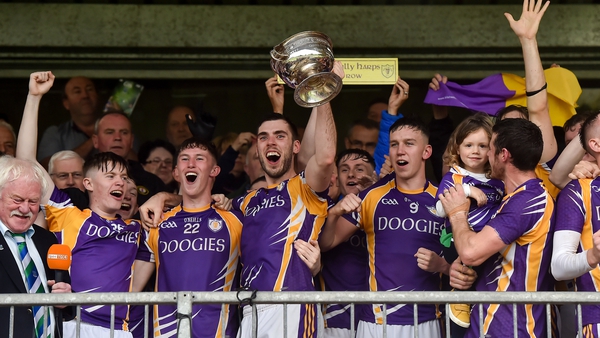