A blistering second half recovery saw Waterford gain some measure of revenge for last year's Munster and All-Ireland Final reversals against a Limerick side which ended this cracking encounter with 13 players.

The Déise ultimately won out by a 1-22 to 0-21 scoreline in Sunday's Allianz Hurling League Division 1 Group A encounter.

Limerick, playing with the wind to their backs, began much the brighter with Aaron Gillane landing a free inside two minutes, while Seamus Flanagan doubled their advantage following a Limerick turnover.

Waterford’s first attack of note could have produced a goal only for Kieran Bennett to rifle his sixth minute shot over Nickie Quaid’s crossbar, as Cian Lynch replied instantly from Limerick’s next attack.

The hosts bridged an 11-minute gap between points thanks to a Stephen Bennett 65, following Nickie Quaid’s deflecting a Calum Lyons shot wide of his left-hand upright. The ever-reliable Gillane completed the first quarter scoring from a 65 to leave the visitors four clear (0-06 to 0-02).

Despite Waterford’s improvement during the second quarter, Limerick extended their lead to five points by the time Paud O’Dwyer’s shrilled his half-time whistle. 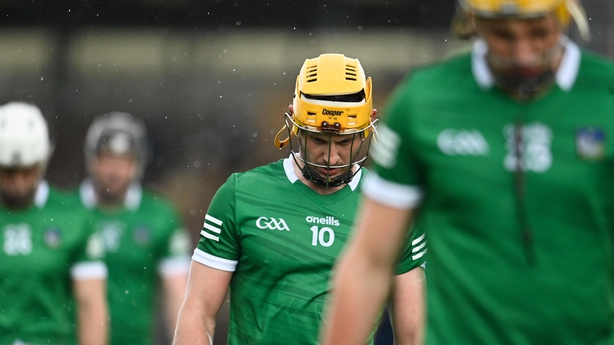 As the rain began to fall, Liam Cahill’s side showed greater efficacy in the field’s middle third, with Stephen Bennett turning over a 20th minute free following a foul on Jamie Barron. Seamus Flanagan, a constant threat prior to his late first half dismissal, turned over a fine point from the left flank following Darragh O’Donovan’s superb crossfield ball.

Jack Prendergast retreated infield to latch onto the one-booted Iarlaith Daly’s pass, only for Gillane to score immediately from the next Limerick attack. Kieran Bennett and Peter Casey traded white flags in the 25th minute before Declan Hannon landed a fine point from deep on the left three minutes later.

Moments earlier, Waterford’s Conor Gleeson was left on the deck near the City End goal following an altercation which, after a discussion with his umpires, saw referee Paud O’Dwyer brandish a straight red to Seamus Flanagan.

By full-time his absence felt like a decisive moment in this contest, but Limerick were good value for their 0-13 to 0-08 interval advantage.

Whatever was said in the Déise dressing room at half-time clearly had the desired effect as they roared back into the contest. Stephen Bennett (a free and 65) and a fine gather, sprint and strike by Iarlaith Daly left them only two points down after 42 minutes. Gillane’s 43rd minute free steadied the Limerick ship somewhat but a superb Calum Lyons point 90 seconds later had the Waterford substitutes on their feet.

Stephen Bennett rifled a shot against Nickie Quaid’s left-hand post in the 46th minute, with Darragh O’Donovan rubbing salt in the hosts’ wounds when pointing from Limerick’s subsequent attack. Gillane turned over another free in the 49th minute before Jack Prendergast, a captain of industry throughout the game, turned over Waterford’s 13th point two minutes later.

Stephen Bennett struck high and true from Waterford’s next attack to leave just a brace of points separating the sides come the second half water break.

With goals at a premium between these sides in recent contests, a goal was always likely to prove critical – as it did this afternoon – as Jack Fagan turned the ball in from point blank range following Stephen Bennett’s cross-goal pass. 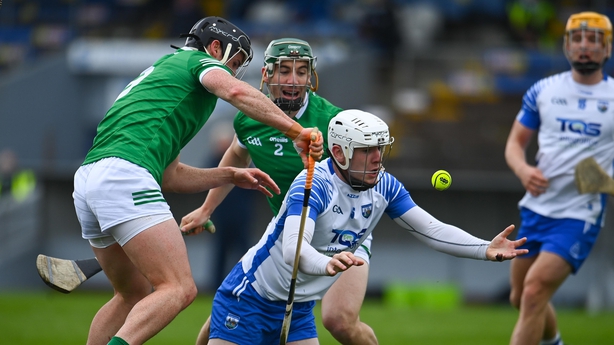 Moments later, Calum Lyons opened up the shoulders again and one could only imagine a home crowd hollering at the sight of such a brilliant point. Aaron Gillane converted a 57th minute 65 to leave only the minimum separating the sides as a grand conclusion beckoned. From wide on the left, substitute Patrick Bennett landed a superb 40-metre point to make an instant impression before Gillane pointed another free just shy of the hour.

Tom Morrissey converted a 65 as the game trickled into injury-time with Liam Cahill urging his men to "see it out".

A foul on Jack Prendergast yielded a 73rd minute point for Stephen Bennett, his fourth free of the day, before Curran crowned a brilliant cameo with his third point from play, assisted by Jamie Barron.

A late scuffle in front of the host’s dug-out, which looked worse than it actually was led to yellow cards for William O’Donoghue and Stephen Bennett – while Kyle Hayes was issued with a straight red for striking. A frantic second half had produced a suitably frantic finale.

"Ah yeah, that's what it's about, I'd say every team would say that," said a delighted Waterford manager Liam Cahill following his side's second successive NHL victory.

"You know what, Limerick are serious opposition, even down to 14 men there today they were never going away, they always looked like they could get something out of the game and I'm sure John Kiely won't be too worried either, to be fair, after today."