Dublin's first goal of their Allianz NHL campaign, scored by Ronan Hayes in the 54th minute, was the decisive score at Parnell Park and helped secure back-to-back Division 1B wins for Mattie Kenny's men.

The strike put Dublin 10 points clear and while Antrim briefly raised a gallop in the third quarter, narrowing the gap to five points at one stage, it was a well-deserved win for Dublin who are now joint top of the table.

Donal Burke, fresh from a huge 0-18 haul against Laois last weekend, top scored again with 0-7 while Daire Gray and captain Danny Sutcliffe helped themselves to three points each with 13 different Dublin scorers in total.

It was a significant win for the 2011 league champions as they will play Antrim again in the quarter-finals of the Leinster SHC in late June in Navan.

Dublin will return to Parnell Park for their Round 4 clash with Clare in a fortnight while Antrim, who pulled off a memorable win over the Banner in the opening round, will also be at home against Wexford on the same day.

Dublin hadn't scored a goal in their previous games against Kilkenny and Laois and that stat perhaps weighed on their minds as they carved out half a dozen openings throughout.

Cian O'Sullivan, a late addition to Dublin's attack in place of Eamonn Dillon, burst through for their first goal chance in the 17th minute but hammered a shot straight at 'keeper Ryan Elliott, who blocked for a 65.

Burke pointed that and nudged the hosts ahead for the first time, 0-06 to 0-05, having been tied on four occasions in an evenly contested first quarter.

Skipper Sutcliffe was a key figure initially for Dublin and extended their lead with a long-range score after the first water break, his first.

Powerful Nugent - who memorably brought manager Darren Gleeson crashing to the ground with a huge bear hug at the final whistle of December's Joe McDonagh Cup final win - had an immediate impact, winning a free that Ciaran Clarke converted.

But Clarke wasted two gilt-edged frees at the Church End of the ground and Dublin capitalised, reeling off seven points in a row between the 14th and 33rd minutes to lead by 0-10 to 0-05.

O'Sullivan had a second goal chance in the 29th minute which was cleared while Cian Boland drew another strong save from Elliott just before the break.

Despite failing to hit the net yet and registering nine first-half wides, Dublin still led by 0-13 to 0-06 at half-time.

They started the second-half with back to back points from Cian Boland and Gray and dominated the third quarter to move 0-19 to 1-9 clear before Hayes grabbed his goal.

It was a strike worth waiting for as he combined with Jake Malone before controlling the sliotar superbly and volleying to the net.

Dublin ran in their full allocation of seven subs and Antrim capitalised on the loss of shape with six of the game's next seven points, hauling themselves back into the game. 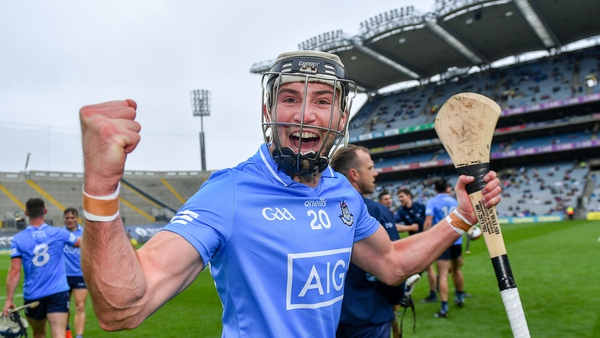