The GAA has stressed its "frustration and extreme disappointment" following reports of Dublin holding a training session involving several players in what was a breach of both the organisation's guidelines those imposed by the Government.

Dublin's seven-in-a-row chasing football team are facing punishment from Croke Park after several players were photographed training together in the presence of a coach.

Following the revelation, the GAA has appealed to other counties and clubs to follow the rules imposed.

The Irish Independent is reporting that the group gathered before 7am on Wednesday at Innisfails GAA club on the northside of Dublin.

The collective session, in contravention of the Government's Level 5 restrictions and the GAA's own rules, came less than 24 hours after the GAA contacted every club and county, warning them that such transgressions could put the return to play – pencilled in for 19 April by Taoiseach Micheál Martin on Tuesday – in "serious jeopardy".

Dublin GAA has not responded to RTÉ Sport's requests for comment as of yet.

Gardaí have said they are "making inquiries into reports of alleged breaches of Covid Regulations" at the training session.

In a statement, they said that if breaches of public health regulations are identified, fines may be issued "where appropriate".

In a statement issued this morning, the GAA said: "It is with frustration and extreme disappointment that the GAA acknowledges reports today of a potential breach of both our own Covid guidelines and those of the Government relating to the restrictions in place around team training.

"Less than 48 hours ago, the association reiterated its commitment to these current guidelines and called for continued compliance in the weeks ahead.

"The GAA will pursue the allegations with the units in question at the earliest opportunity and will invoke any necessary disciplinary processes as appropriate.

"In the meantime, while we acknowledge that the overwhelming majority of Counties and Clubs have complied in an appropriate and responsible way with the restrictions currently in place, we once again call on our members and units to uphold the integrity of the association as part of our ongoing efforts to play our role in thwarting the virus and ensuring a return to activity when it is safe to do so."

This is the third instance of an inter-county breach of the rules imposed by the body.

Cork and Down footballers were both found to have broken the rules on collective training earlier this year, with Rebels manager Ronan McCarthy receiving a 12-week ban from the time of the infringement and Down boss Paddy Tally hit with an eight-week suspension.

Cork undertook a form of team training on a beach, while Down held a team meeting.

On Tuesday, the Irish Examiner reported that Gardaí are investigating a west Cork GAA club for a breach of restrictions.On 5 January, the GAA confirmed that no collective training would be permitted for inter-county teams until further notice, warning that breaches would be dealt with under Rule 7.2 (e), which deals with misconduct considered to have discredited the association.

Minister of State for Sport and the Gaeltacht, Jack Chambers TD, outlined his "great frustration" at today's news following on from the "clear message given from Government and the GAA".

Speaking on RTÉ's News at One, Chambers said: "I am extremely disappointed and surprised at such an error of judgement. I think the protocols are clear and the GAA communicated those to every county in the last 48 hours, stating that training could commence for inter-county teams on 19 April.

"I think it's important to say that the Dublin team and every team across the country has an important leadership role in following the public health advice. There is great frustration out there to see role models in Dublin GAA undermining the rules that have been set out.

"What we've seen over the last 12 months has been the opposite, where players training have shown their dedication and commitment to playing their role in response to Covid. In the context of very difficult restrictions for the public and the ongoing lockdown, people are very frustrated today.

"I'm concerned that the clear rules and guidelines have been breached. We want to see a phased reopening of society and sport and the 19 April was the clear message given from Government and the GAA on when training could recommence."

In spite of the breach by some members of the Dublin squad, Chambers does not see the 19 April being pushed back. "I don't believe so" was his quick response, but he has called on the GAA to reinforce the message that such breaches are "unacceptable".

"I welcome the statement from the GAA that they are going to pursue the allegations, fully establish the facts and then commence the necessary disciplinary processes. What we need to ensure that no other county breaches the rules, that they follow, reinforce and also publicly advocate the broad, public health advice. Many of them are doing that on a regular basis.

"Once the GAA established the facts they obviously need to set an example to their broader membership and say that this is unacceptable. When rules are in place, there needs to be compliance. We have broader frustration across society with people not able to attend funerals, go outside the 5km restriction and a whole other areas of frustration.

"Many of our inter-county players are important role models and have been very positive in promoting the public health message. Today undermines that and I think what we need to see is the GAA following through on their statement which is very clear in acting on this at the earliest opportunity."

The Gaelic Players Association urged all members to stay the course and adhere to government regulations.

In response to an RTE query a GPA spokesman notes the GAA's statement acknowledging reports today of a potential breach of both Government and  GAA Covid-19 guidelines restricting training by inter-county teams.

"The GPA will be making no comment on the individual case involved as this is an ongoing GAA investigation.

"More generally, the GPA's position has been consistent on the matter of training restrictions since the beginning of the pandemic - they should be respected. This has been, and will continue to be, communicated to all our members.

"As recently as yesterday there was further communication with players in this regard.  A confidential disclosure platform has been in place since late 2020 to facilitate players’ reporting of any suspected breaches.

"We again urge all players, managers and county boards to comply with government and GAA guidelines on training and games." 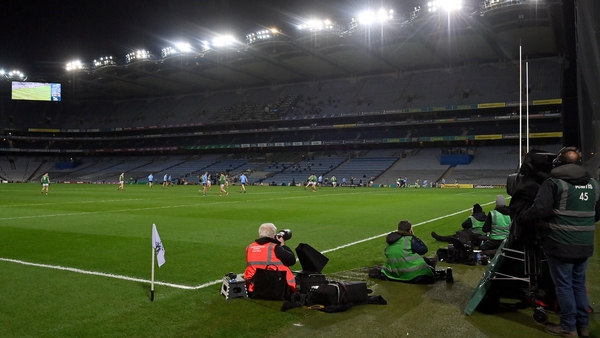