Keith Higgins said the knowledge that he would not be able to maintain the standards he's set himself as a Mayo player for 16 campaigns was the deciding factor in him walking away from inter-county football.

The 35-year-old became the sixth Mayo player to retire since the beginning of 2021 earlier this week having established himself as one of the finest defenders in the country over a terrific career.

The Ballyhaunis defender didn't feature much over a winter which ended with yet more All-Ireland final heartache for the Green and Red against Dublin and he says he has no regrets about calling it a day.

"I'd made the decision about two weeks ago and spoke to James [Horan] about it," he told RTÉ's Game On.

"I'm well happy with the decision at this stage. That's the way it goes. Time moves on. We just have to get over these things I suppose.

"It was more of a case of looking back on the season, looking at how the body was, and then seeing if I could get back to the level I wanted to get to. I just didn't think it was going to be possible and I didn't want to go through the year fighting a losing battle and getting frustrated with things."

The plaudits have rained for Higgins who was hugely respected by both team-mates and opponents.

"I returned to work on Monday after a career break of 12 months so it hasn't really sunk in just yet," he admitted.

"It's only when you see texts coming through from players you'd have played against... that really gives you an appreciation for some of the battles we had with lads down the years.

"I got a text today from one of the Dublin guys. They're not the type of texts you expect to get at 2 or 3 in the afternoon. It's stuff like that that kicks home the whole thing of, as much as want to try and beat these guys when you're playing against them, there is that mutual respect there, that they're going through the same thing year in, year out.

"I have to very appreciative of [my career]. I had 16 seasons with Mayo. If you'd asked me back in 2005 when I made my debut against Dublin would I be there for 16 years I'd have said I'd be doing well to be there for six months.

"I look back on it with a lot of pride I've been extremely lucky that I haven;t had any really bad injuries. I was able to get most years injury free. I was lucky to get so long, to get a good run at it." 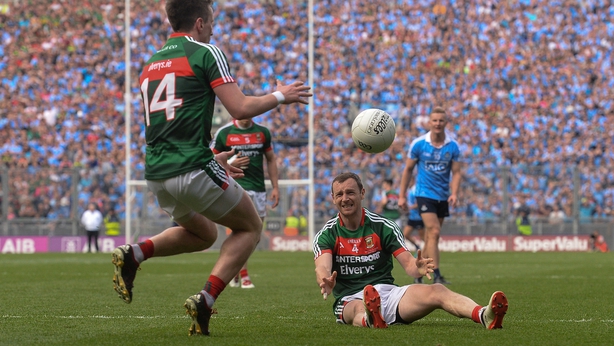 Of course, he's endured many difficult days. Higgins does not hide the fact the defeats took a toll.

"They were tough. The [All-Ireland SFC semi-final replay against] Kerry in Limerick in 2014, that's probably one of the most high-profile ones but stuff like that is very difficult to take.

"That's the joy of sport. We'd some very good days out as well. There's nearly always another game around the corner. In fairness to that Mayo team they epitomise that. They keep coming back every year and give it another go.

"That was always my attitude every year. As long as I thought I was able to go back and contribute something, why not?"

Leaving the WhatsApp was an emotional tug but the pragmatic Higgins is taking in his stride. His Mayo football days may be over, but he will continue to represent his county in hurling.

Keith Higgins has been telling @GameOn2FM how he came to his decision to call time on his Mayo career #rtegaa pic.twitter.com/dioswULbhW

"You do build up bonds with lads. You're spending three four nights a week with lads in training. Then all of a sudden there's very limited contact .That's just the way life is. It's not something I try to dwell on. It's part and parcel of it.

"I spoke to the hurling manager Derek Walsh at the beginning of the week as well. I said as long as I was able to give it a go I;d come back in with them. It's always been a passion of mine to play hurling as well."