The Ballina Stephenites man spent 20 years on the panel, making his championship debut for the Green and Red in 2005 against Roscommon, three years after playing in the Allianz League against Kildare.

He went on to play 56 times for the westerners in championship and 133 times in total.

While he never won an All-Ireland with Mayo, he did claim the ultimate prize with his club on St Patrick's Day 2005.

"Today I have decided it is the right time for me to step away from the Mayo senior football team," Clarke said in a statement released through Mayo GAA.

"I have lived my dream and taken so much from the experience. I want to thank all of my past managers, coaches, medical staff and county board officials, from when I was under-16, minor, under-21 and senior.

"I'd like to give a special mention to my goalkeeper coaches Eugene Lavin, Peter Burke and Tom Higgins who helped bring out the best in me.

"I'm grateful to my club, Ballina Stephenites, their coaches and my schoolteachers who helped me develop as a player and to love the game. 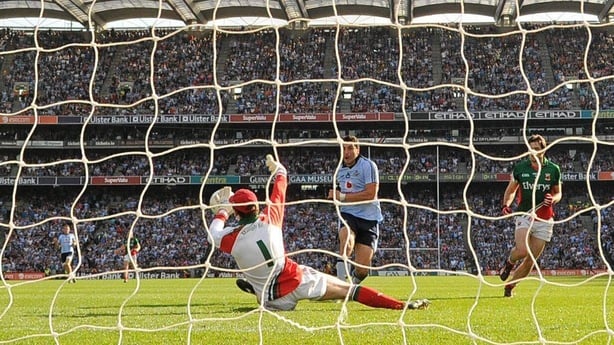 "To the Mayo supporters, thank you for the support, it does make a difference.

"Finally, to all the players I played with, it was an honour to wear the jersey with you. I now look forward to giving more time to my club and returning to being a Mayo fan again."

Mayo GAA chairman Liam Moffatt added: "On behalf of Mayo GAA, I would like to thank David for his outstanding dedication and performances with Mayo GAA over the last 20 years."

He's the second Mayo player to retire in 24 hours after Donal Vaughan announced his decision to go yesterday.